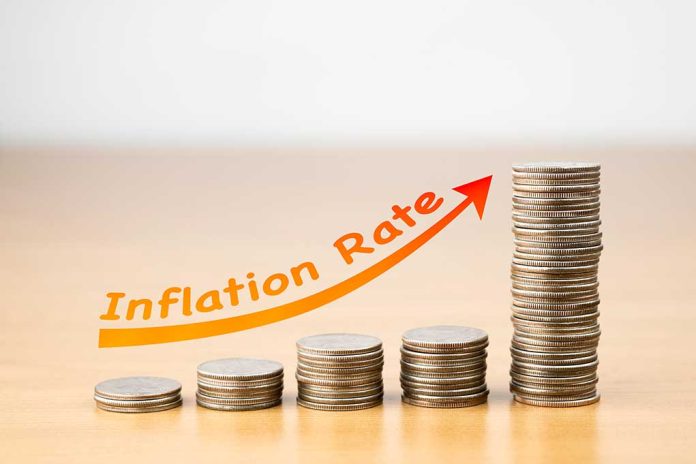 (UnitedVoice.com) – As Christmas and New Year’s approach, soaring inflation is putting a tight squeeze on cash-strapped Americans. Over the last six months, gasoline, groceries, consumer goods — virtually everything one purchases has gotten more expensive. According to economists, things won’t get any better anytime soon.

While the money experts debate what’s driving the sky-high inflation, Democrats are finally coming around to acknowledging there’s a problem. For several months, the Biden administration tried to paint a picture that inflation was a good thing. It meant people were spending money. Yet, that’s a symptom, not the root. The real problem is the massive injection of cash into the economy. Yet, Democrats refuse to see it as they try to transform America into a cradle-to-grave, government-dependent society.

On Monday, December 6, economists predicted that the overall consumer price index would rise 6% in the fourth quarter compared to the same time in 2020. In September, economists predicted a 5.1% growth in inflation. By the end of 2022, economists expect inflation to grow at 2.8% compared to 2021. That’s up from the 2.4% prediction in September as well. Energy prices are expected to increase 4.1% in the fourth quarter. Again, that’s up from a 3.8% prediction a few months ago.

Do you notice the trend?

Making matters more frustrating for Americans, economists say the US economy won’t meet the Federal Reserve’s target of 2% economic growth, which is considered healthy, until the second half of 2023 or 2024.

What does this mean?

It shows that economists are either underestimating the growth of inflation to keep people from freaking out and making a bad problem worse, or they simply don’t understand what’s going on.

Federal Reserve Set to Pull Cash Out of Economy

Nobel Laureate Economist Milton Friedman once said the key to understanding inflation is to watch what the government does. If Congress and/or the Federal Reserve injects money into the economy, it creates a massive cash supply. In turn, Americans flush with cash will spend it, causing the demand for products and services to rise quickly. What follows is inflation.

The Federal Reserve seems to be acknowledging Friedman’s analysis as inflation accelerated instead of peaking during the summer as expected last spring. At their upcoming meeting on December 14-15, the Federal Reserve is expected to focus on restraining inflation by pulling back on injecting cash into the economy in preparation to raise interest rates.

Raising interest rates will make buying homes, cars, and using credit more expensive. This would make Americans traditionally pull back their spending, causing demand for products to drop. In turn, inflation should begin to decrease — in theory.

Democrats are Not Getting the Message

If one part of the government doesn’t do its part, it won’t matter much what the other parts do to restrain massive price increases. Republicans in Congress say that Democrats’ continued desire to inject cash into the economy through their semi-socialist agenda would add jet fuel to the fire and exacerbate the problem.

Rep. Alexandria Ocasio-Cortez (D-NY) is finally acknowledging inflation as a problem. Unfortunately, she and many others believe the answer to the problem is the $1.75 trillion Build Back Better legislation sitting in the Senate. So, spending more money is their answer. It makes sense.

In 2009, then-Vice President Joe Biden said the government needed to spend money to keep from going broke. It defies logic and the laws of economics. Yet, this is what Democrats believe. Unfortunately, history shows they are wrong. In the 1930s, 1960s, and 1970s, massive government spending resulted in runaway inflation. In the 1980s and 1990s, the government shrank by one-fifth, and the economy expanded at the fastest rate in decades.

Here’s the problem. Democrats twist facts to meet their political goals instead of adjusting policy objectives to meet the needs of America. That’s called manipulation and political malfeasance. America knows what’s going on. If Democrats think they know better, they may pay dearly in election defeats in November 2022.