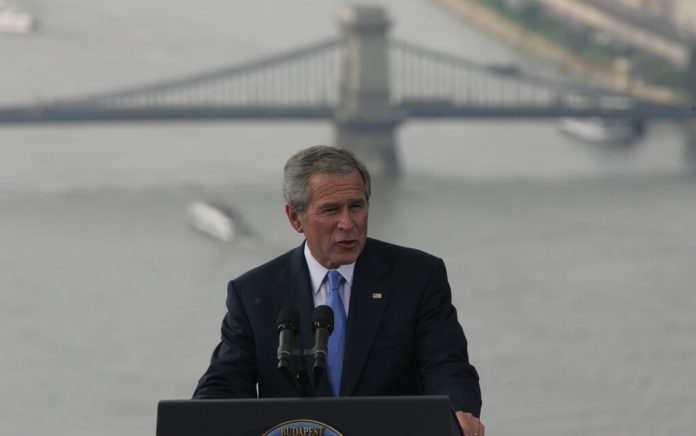 (UnitedVoice.com) – It’s been 13 years since former President George W. Bush left office. Yet, it appears terrorist groups haven’t forgotten about him. It’s not uncommon for former presidents to receive threats, and it’s one of the reasons why they retain Secret Service details for the remainder of their lives.

Federal authorities said Shihab entered the United States legally in September 2020 on a visitor visa. In March 2021, he filed an asylum claim, which is currently under review. The FBI uncovered the scheme to kill the former president through two confidential informants and surveillance of Shihab’s WhatsApp account.

The FBI said Shihab wanted to kill the former president because Bush was allegedly responsible for killing Iraqis and breaking up the country after the US military invaded Iraq in 2003 and took out former President Saddam Hussein. Forbes said the suspect was part of an extremist terrorist group called Al-Raed. A former Saddam Hussein apologist based in Qatar led the group until he died recently.

The DOJ said Shihab attempted to recruit up to seven members of Al-Raed to come to the US to assassinate Bush. Shihab’s role was to locate and surveil the former president’s home and acquire guns and cars for use in the assassination attempt.

The Justice Department said Shihab told one FBI confidant the planned to recruit four Iraqi national men from Denmark, Egypt, Iraq, and Turkey and help them gain entrance into the United States. The suspect told the informant one of the men was the secretary of an ISIS financial minister and said they were all former Baath Party members, exiled over their disagreements with the current Iraqi government. The FBI noted Shihab would charge $15,000 for helping the ISIS operatives obtain entry into the United States.

Before the arrest, Shihab surveilled Bush’s home on February 8. Next, he used WhatsApp to get the ISIS operatives’ information to apply for a Mexican visitor visa. In March, the DOJ said Shihab and others gathered at a Colombus, Ohio, hotel to look at firearms and law enforcement uniforms they would use in the assassination attempt.

The DOJ said if convicted, Shihab’s attempt to smuggle people into the US is a federal crime punishable by up to 10 years in jail. Aiding and abetting the attempted murder of a former US official could merit up to 20 years in federal prison.