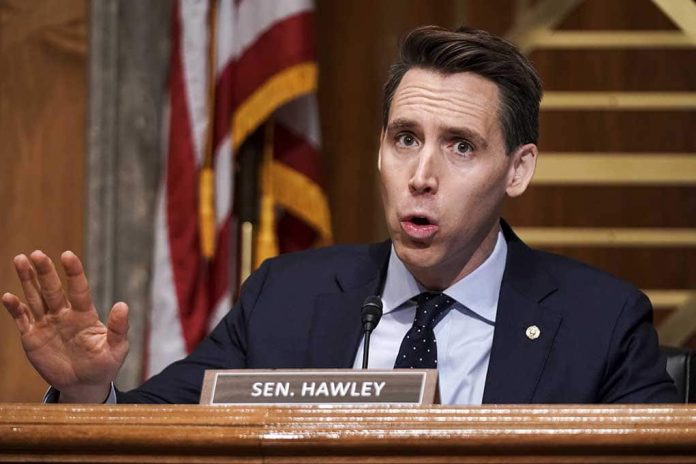 (UnitedVoice.com) – When the National School Board Association (NSBA) first addressed an inflammatory letter to President Joe Biden about the insurmountable threat of violence and harassment from disgruntled parents, they clearly hoped to push leaders into action. Attorney General Merrick Garland answered their call by getting the Justice Department and the FBI involved — but Senator Josh Hawley (R-MO) now has a serious problem with that decision.

A Dangerous Abuse of Authority

In a mid-morning tweet from October 22, Senator Hawley blasted the Attorney General for failing to properly investigate the threat of protesting parents before deciding to weaponize the Justice Department.

Merrick Garland mobilized the FBI to intimidate parents without legal basis and, we now know, premised on misinformation he didn’t bother to verify. It was a dangerous abuse of authority that has badly compromised the Justice Dept’s integrity and Garland’s. He should resign. https://t.co/MXKN5j0L5g

Hawley accused Garland of having absolutely no legal basis to take that kind of action in response to the NSBA’s complaint. In his eyes, the Attorney General’s decision constitutes a dangerous abuse of authority so severe he should immediately resign from his post.

The NSBA’s original letter, issued on September 29, paints a disturbing picture of a terrified education industry steeped in chaos — at least at first glance. It begs national law enforcement agencies to step in and end severe “threats of violence and acts of intimidation” from parents. At one point, it even likens their actions to a new form of domestic terrorism.

Attorney General Merrick Garland responded to that letter on October 4, directing the FBI to initiate a task force to study and take action on the supposed threat.

The NSBA notably retracted its own letter, regretfully apologizing for the memo and the inflammatory language contained within it, on October 22.

Breaking: In the wake of yesterday's @FreeBeacon report, National School Board Association announces "we regret and apologize for the letter" to Biden admin characterizing concerned parents as potentially domestic terrorists pic.twitter.com/3RBufvWqAN

Despite the tone throughout the NSBA’s original letter, many of these “problematic parents” seem less like violent criminals and more like people with strong opinions. They are, in most cases, people who disagree with local school boards on controversial topics, such as COVID-19 protocols, masks, or critical race theory.

Listed as “proof” are several examples from incidents around the country. Police arrested a parent for aggravated assault in Illinois during one event. In another, an individual shouted a Nazi salute in response to mask mandates during a school board meeting in Michigan.

Another example accuses a parent of nothing more than live-streaming themselves while calling their local school board to complain. Is that truly a crime?

To be clear, the incidents mentioned by the NSBA do appear to be legitimate. Whether or not they are severe enough to justify a national threat response from an FBI task force is another matter entirely.

A Matter of Perspective

In a Fox News video segment on October 25, Senator Hawley outlines why the fallout of this situation is so concerning. The Attorney General based his entire decision to mobilize federal resources against parents on a single NSBA letter — one the organization later retracted in full. Garland effectively failed to vet any of the information or claims before taking action.

As Hawley points out, this is an irresponsible and slippery slope. There was never any verifiable legal basis for involving the FBI or encouraging them to investigate dissenting parents with legitimate concerns about learning environments. It stood to silence any parent who disagreed with daily school operations at any time. That threatens free speech.