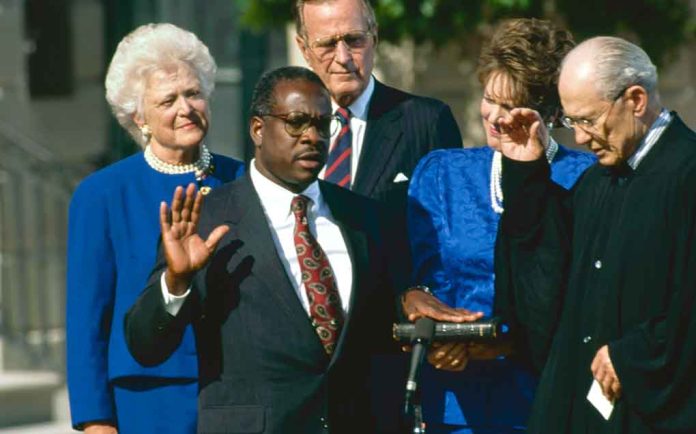 Justice Thomas Suggests An Era Is Over

(UnitedVoice.com) – The Supreme Court has been in a state of upheaval since the first draft of an opinion about abortion leaked to the press. The incident sent shockwaves across America and through the court. Chief Justice John Roberts condemned the leak and called for an investigation. And Justice Clarence Thomas is now speaking out about it, too.

On May 13, Thomas spoke at a conference for black Conservatives in Dallas when he addressed the recent controversy. The associate Justice said he thinks what happened is “tremendously bad.” He went on to say he wonders if the US will be able to maintain the institutions that are being undermined or “when they’re gone or destabilized what we will have as a country.”

Clarence Thomas just said this – not about J6, attacks on the press, the public school system or free elections. Oh no – this is about the leaked brief: “I think we are in danger of destroying the institutions that are required for a free society.” pic.twitter.com/VZ12F11Afi

Thomas also said the leak changed the working climate of the Supreme Court. He pointed out the new court isn’t the same as the “court of that era” when he sat next to the late Justice Ruth Bader Ginsburg for nearly 30 years. He called her an “easy colleague to deal with” even though they were polar opposites. The Justice also slammed Liberals who are protesting outside of the homes of the conservative Justices on the court, saying Conservatives would never protest like that if things didn’t go their way. “We didn’t throw temper tantrums” when the Court ruled against right-wing issues, he said.