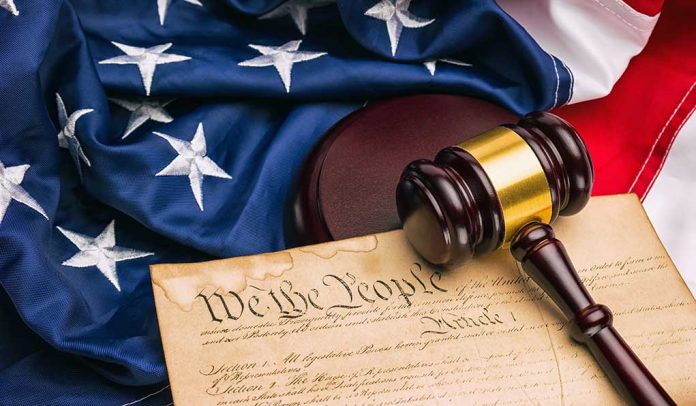 (UnitedVoice.com) – In 1902, President Theodore Roosevelt warned Americans that corporations held too much power over their lives. He often referred to big business as the “creatures of the state” and said they weren’t trustworthy. Decades later, the Democratic Party adopted Roosevelt’s views from the 1930s through the early 2000s. Those days are long gone. American politics completely flipped.

Democrats are finding it nearly impossible to govern in the image of the far-left in a nearly evenly divided Congress. Even when they muster through some of their agenda through President Joe Biden’s executive orders, the courts slap them down as unconstitutional. On Thursday, July 15, White House spokesperson Jen Psaki let it slip the government is colluding with Facebook to censor Americans. It’s a pattern that may be developing between big businesses and the government — and it could be the perfect end-run around the US Constitution for the far Left as it establishes a shadow state.

Is Big Business Doing the Heavy Lifting for the Far Left?

The US Constitution gives clear guidance on what the government can and cannot do to the American people. Consider this: It was just a few years ago, Democrats were still denouncing the landmark 2010 Citizens United case. Now, they are suddenly staunch advocates for corporate free speech, justifying the censorship of opposing views and manipulating the public to do the government’s bidding.

It’s the perfect win-win scenario for far-left politicians desperate to gain control over the public. It’s not difficult to see how the government is colluding with private businesses to do an end-around to the Constitution.

On July 7, Psaki said the government was not going to mandate a vaccine passport. However, she admitted the Democrats hoped corporations and other private sector entities would require vaccinations and make it hard for people to remain unvaccinated. As private entities, companies can deny unvaccinated people the opportunity to work or travel, eat at restaurants, go to the movies, shop in stores, or deny Americans the right to enjoy life in public.

In essence, the government is encouraging private entities to create a national passport system on their own. Businesses are responding. Morgan Stanley recently said those who work remotely would see reductions in pay.

While the government may not directly censor Americans, they can’t stop Facebook and Twitter from doing it for them. On Thursday, July 15, Psaki even admitted the government is flagging posts it wants Facebook to remove. Facebook appears to be all too willing to comply. It seems Americans can only discuss controversies within the guidelines established by the private entities under the government’s blessing.

Is This the Fascism Democrats Warned of for Four Years?

If politicians and government bureaucrats are allowed to use corporations as their surrogates, they will erode the liberties granted to Americans under the US Constitution. For four years, Democrats warned Donald Trump was a fascist. Yet, there was no coercion against Constitutional rights by the Trump administration. Far from it.

In 1938, President Franklin Roosevelt stated, “The first truth is that the liberty of a democracy is not safe if the people tolerate the growth of private power to a point where it becomes stronger than their democratic state itself. That, in its essence, is fascism — ownership of government by an individual, by a group, or by any other controlling private power.”

Will the lines continue to blur between government and corporate power to control Americans?

Only time will tell.