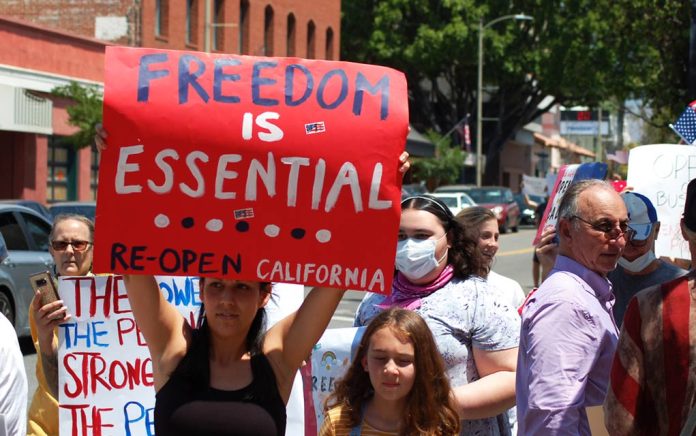 (UnitedVoice.com) – “Never let a good crisis go to waste” has been the working belief of Democrats for a generation. They haven’t disappointed anyone living up to this mantra, especially regarding recent events.

Over the last few months, government-induced lockdowns based on incomplete information, riots on the streets of cities, and blatant hypocrisy have served to intimidate some conservatives and keep them from speaking out. Liberals are now growing confident that they have the upper hand at getting back power through intimidation instead of good leadership.

COVID-19 appeared in March, triggering health authorities, state, and local political authoritarians to say that the economy had to be shut down. President Donald Trump warned that the cure could not be worse than the disease — but that fell upon deaf ears.

They claimed that hospitals were going to be flooded, and 2.2 million Americans could die. That turned out not to be true. Faulty assumptions led to the creation of a false computer model projection. Yet, it didn’t stop liberal governors from being overhanded with their policies.

Americans want to trust the government. They want to believe they are being told the truth. So, Americans agreed that we needed to protect one another.

In three months, liberals learned how easy it could be to con the American people into believing it was in our best interest to destroy our economy. In one month, America’s economy went from being the envy of the world to near collapse.

Unemployment at its peak was over 40 million people. It’s estimated that 80% of restaurants may not survive. The federal government spent $8 trillion between Congress and the Federal Reserve to keep people locked down.

When some Americans caught on, they began exercising their Constitutional right to protest the government. They were reprimanded and scolded by governors across the country who were facilitating the con. Governors and mayors used law enforcement to threaten and punish peaceful protestors.

Social Justice Hijacked and Hypocrisy Rises From the Ashes

While the police killing of George Floyd sparked legitimate and rightful protests, rioters hijacked the cause and began burning cities across America. Democrats who threatened conservative protestors just weeks before, saying they could spread COVID-19 and kill grandma, turned the cheek and walked side-by-side with social justice advocates.

Also in response to Floyd’s death, far-left Democrats began calling for police defunding. In Seattle, a group of rioters chased out police and created an “autonomous zone” where police were no longer welcome. The mayor called them “patriots” and wrongly said they were protesting peacefully.

Over the last week, Democratic leaders embraced protests across the country as the participants defaced or outright destroyed monuments.

In Philadelphia, a group of people surrounded a statue of Christopher Columbus to protect it from vandalism. However, the city government used its power to publicly denounce those safeguarding the monument, calling them “criminal bullies.”

It’s clear that governors, as well as state and local officials, are intentionally undermining law and order.

For over a decade, far-left Democrats and activists groups tried to change America politically. That hasn’t worked. Now, they are using the power of state and local governments to see how far they can push citizens into accepting that America is a failure and change it in their image.

This started as a pushback against President Trump over three years ago and has been picking up steam ever since.

Democrats and the media say it is appropriate and okay for protestors to gather for police brutality and social injustice. In this case, they are right. However, they are wrong to then turn around and say it’s dangerous to attend a Trump rally because people could get or spread COVID-19. They never mention that when thousands are not practicing social distancing during protests.

Will the silent majority grow and remain silent and allow themselves to be intimidated, or will more Americans peacefully push back against the threat?

The real question is though, where is all this leading us?

The above opinions are solely those of the author and do not necessarily represent the opinions of the publisher.