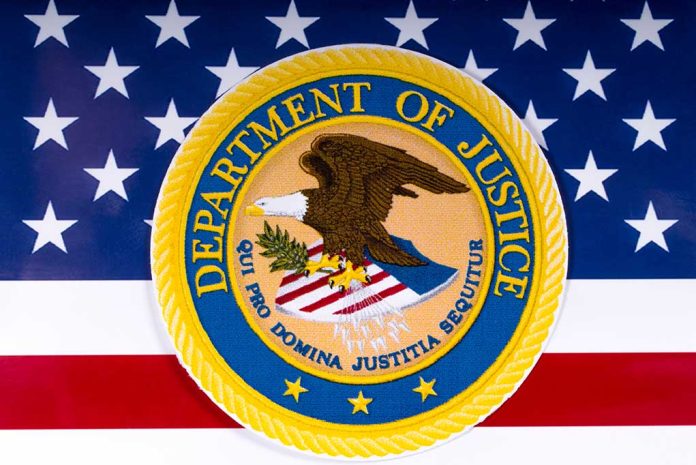 (UnitedVoice.com) – During the 2020 presidential election, then-Democratic candidate Joe Biden swore if elected, his administration wouldn’t use the Department of Justice (DOJ) to wield political power. Like much of Biden’s campaign rhetoric, it didn’t mean much. He claimed to be a Moderate — he’s not. Biden claimed he would unite America — he didn’t. Biden promised to follow the law — he’s as lawless as a president’s ever been.

On Monday, January 6, the DOJ took it upon themselves to carry the Democratic kool-aid. In April, numerous GOP-led states initiated voting reforms to make voting easier and cheating harder. They expanded early voting and the time one could cast a ballot, codified ballot boxes into law, and ensured only a voter could present their ballot. Democrats called it voter suppression and sued both Arizona and Georgia — and lost in federal courts and the Supreme Court.

Now, the DOJ is targeting Texas as the legislature moves to finalize its redistricting maps. On Friday, December 17, Maryland GOP Gov. Larry Hogan wanted to know why the DOJ isn’t suing his state’s Democratic-led legislature for doing the same thing as Texas.

It’s not often one hears a governor plead with the DOJ to sue their state. Yet, that’s what Hogan is doing. The Justice Department alleges Texas violated the Voting Rights Act by discriminating against minority voters. The move is an apparent political ploy by Biden’s attorney general to stop the Republican-led state legislature from drawing congressional maps favorable to GOP congressional candidates.

There’s just one problem. Democrats went after GOP states, but they are turning a blind eye to their own. Gerrymandering is occurring in California, New York, Virginia, and Maryland, all Democratic-led legislatures. What’s good for the goose is clearly not good for the gander.

On Friday, Gov. Hogan wrote that Maryland’s proposed maps are much worse than the ones in Texas and alleged Democrats violated the Voting Rights Act. Hogan vetoed the redistricting bill, saying the Democrats eroded fairness and integrity in elections and the political system. He added the legislation was a shameful disgrace and in violation of state and federal law ahead of the large Democratic majority’s rebuttal of the governor’s veto.

So, where’s the DOJ when it comes to Maryland? Apparently, Attorney General Merrick Garland is nowhere to be found. Gerrymandering must only be gerrymandering when Republicans do it.

If Americans are losing faith in government institutions, it’s political posturing by partisan bureaucrats like Garland contributing to the nuisance. Hogan hit on a significant political problem for Biden and the DOJ. If they are obligated to sue one state for allegedly breaking the law, aren’t they bound in the name of justice to sue every state doing the same thing, regardless of the benefit to their party?

Garland and Biden effectively argue through legal action and inaction that gerrymandering is acceptable if it benefits their agenda. It’s the grossest kind of politics by the DOJ, supposedly an impartial arbiter of the law.

As the case heads to court, expect the DOJ’s partisan actions to be a major thrust of their argument. Besides, Garland doesn’t have a strong likelihood of winning the case. Over the last five years, the Supreme Court set a precedent it doesn’t get involved in state legislative matters regarding redistricting. It’s left to state courts where Democrats have mixed results.

The DOJ’s actions only cement the view among half the country that Joe Biden is not the good, honest, middle-of-the-road guy he presented himself to be in 2020 as he hid in his basement. Perhaps in future elections, Americans will be more eager to examine not just what someone says but what their campaign website and party doctrine states.

It was there all along.