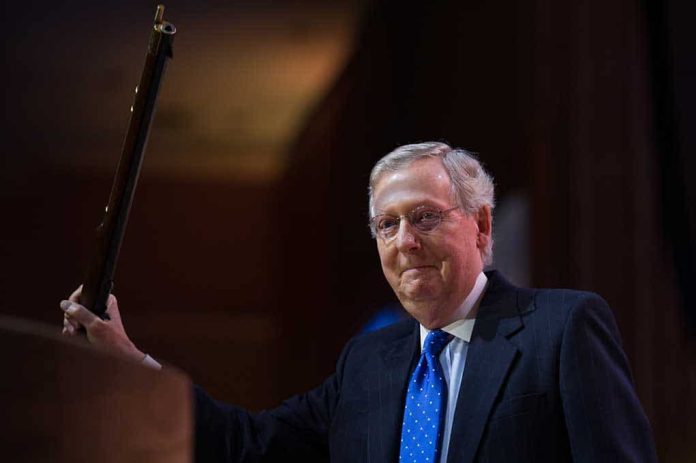 (UnitedVoice.com) – Are Democrats facing a no-win scenario? It appears they could be as Democratic leaders prepare to advance a partisan “human” infrastructure plan. With time running out on a tight self-imposed timeline, Senate Democrats are not in agreement on what a reconciliation package would even look like at this point. On Tuesday, July 6, Senate Minority Leader Mitch McConnell (R-KY) launched a grenade in hopes he could cause enough collateral damage to destroy the Democrat’s reconciliation plans.

The Senate is currently in the middle of a two-week 4th of July recess. When Senators return to Washington, DC, Senate Majority Leader Chuck Schumer (D-NY) hopes to vote on the traditional bipartisan infrastructure proposal agreed on before the holiday. There’s no guarantee that legislation will garner 60 votes. In addition, Schumer also expects to vote on the reconciliation budget resolution to pass the Democrat’s extreme “human” infrastructure agenda. On that note, McConnell said during a speech in Kentucky that “the era of bipartisanship on this stuff is over.” He added there would “be a hell of a fight over what this country ought to look like in the future.”

If Democrats think that bypassing Republicans to pass extremist legislation is good for them, McConnell can’t stop them. However, he can make them extremely uncomfortable by painting the picture of how bad the Left’s proposals are and working to sway Moderate Democrats. The Senate Minority Leader tipped his hat and suggested the GOP may try to twist the arms of moderate Democrats from rural America who may find the process and legislation “offensive.”

Public pressure is about the only option Republicans have at this point. That may be good enough. As a party, Democrats are not on the same page, and Schumer can’t afford to lose even one Democrat in an evenly divided Senate. That makes the situation difficult for a party that has shifted left over the last few years but still holds a few Moderates from states opposed to the progressive agenda. Three Moderate Democratic senators could immediately throw a wrench into the extreme plan that expands certain social benefits and focuses heavily on climate change.

Sens. Joe Manchin (D-WV), Kyrsten Sinema (D-AZ), and Jon Tester (D-MT) could become a serious problem for the Democratic leadership. Manchin and Tester hail from very red conservative states, and Sinema is from a deep purple state. All three are considered vulnerable in future elections. Manchin recently stated without hesitation that he would not accept anything over a $2 trillion bill. Both Sinema and Tester both expressed concerns about the size and amount of the Left’s proposal and are not committed to reconciliation at this point.

The three senators are deeply at odds with Senate Budget Committee Chairman Bernie Sanders (I-VT), who is pushing hard for a $6 trillion downpayment on climate change. Therein lies another rub. Not only is the amount $4 trillion higher than Manchin’s limit, many of the climate change proposals that Sanders and the Left want are out of sync with what West Virginia voters would accept. Manchin would have a big decision to make. He either votes against his constituents’ interests or votes against reconciliation and deals with angry Congressional Democrats and hostile media.

There is one other challenge. Members on the far-left made it clear that if they don’t get the human infrastructure deal, they won’t vote for the bipartisan traditional infrastructure proposal.

That’s what a narrow process this has become. Either the Democrats get it all, or they threaten there will be nothing.

McConnell appears okay with that for now. If it means saving the country from the dangerous and reckless proposals of the far-left, so be it.