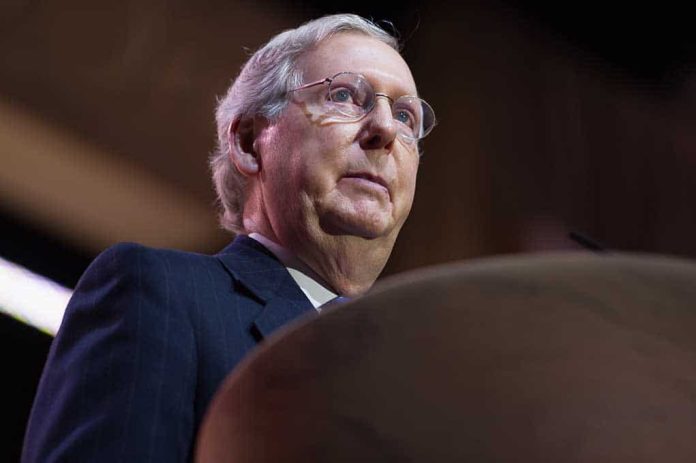 (UnitedVoice.com) – Democrats are moving full steam ahead with their $1.9-trillion stimulus package. The lawmakers intend to use budget reconciliation to push the legislation through with a simple majority. Sen. Mitch McConnell (R-KY) thinks the Left is playing a dirty game.

In a March 2 tweet, McConnell said only about 9% of the spending in the Democrats’ bill will directly fight COVID-19. The rest of the bill is just a leftist wish list.

Less than 9% of Democrats' spending plan would go to directly fight COVID-19. Less than 1% to vaccinations.

This isn’t a recipe to safely reopen America. It’s what Democrats promised almost a year ago: Taking advantage of the crisis to check off unrelated liberal policies.

According to a report by OAN, the minority leader said he hopes Republicans in the Senate will unanimously oppose the bill, just like the House GOP did. That’ll show the American people the “only thing bipartisan” about the legislation is the “opposition to it.”

There’s no doubt people need help. However, Republicans prefer a targeted plan that doesn’t waste billions of dollars and funnel money into leftist projects like the $140-million high-speed rail in Democratic Rep. Nancy Pelosi’s district. Saddling generations of Americans with more debt through wasteful spending is irresponsible and wrong.