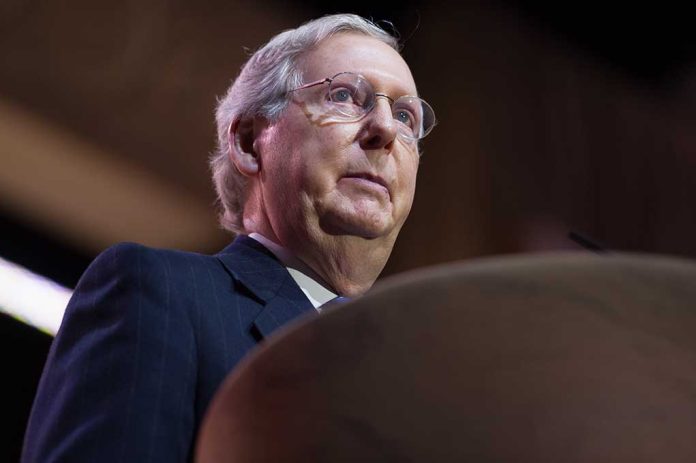 (UnitedVoice.com) – The Senate’s top Republican has made one of his Democrat colleagues an offer that he’s almost certain to refuse. Should Joe Manchin (D-WV) cross the chamber and become a Republican? Many of his fellow Dems would probably say he might as well be a Republican anyway – and he certainly isn’t a White House favorite this week.

On December 16, Senate Minority Leader Mitch McConnell (R-KY) told journalists that Manchin defecting to the GOP “would be a great idea.” He explained that because Manchin represents one of the most solidly red states in the US – he’s the only West Virginia Democrat in Congress – he’d do better in the GOP. Being realistic, though, McConnell added, “I don’t think that’s going to happen.”

“As you know, he likes to talk,” McConnell said of Manchin. “It would not surprise you to know that I’ve suggested for years it would be a great idea, representing a deep-red state like West Virginia, for him to come over to our side.” https://t.co/en6fxq9Hsc

The relentlessly centrist Manchin has been a thorn in the side of the administration since President Biden took office, and tensions between him and the White House reached new heights on December 19. On Sunday, Manchin said he “cannot vote to continue” with the administration’s flagship $1.75-trillion “Build Back Better” spending package – striking a potentially fatal blow to it. Although the Democrats technically have a majority in the Senate, that’s only down to Vice President Harris casting her vote. With senators themselves balanced 50:50, a single Democrat rebel takes Harris’s vote out of the picture and allows the GOP to block any bill from passing. Manchin has, repeatedly, been that rebel.

While McConnell is right to say Manchin – who once described his relationship with President Obama as “fairly nonexistent” – might be happier as a Republican, perhaps it’s best for the GOP if he stays right where he is.