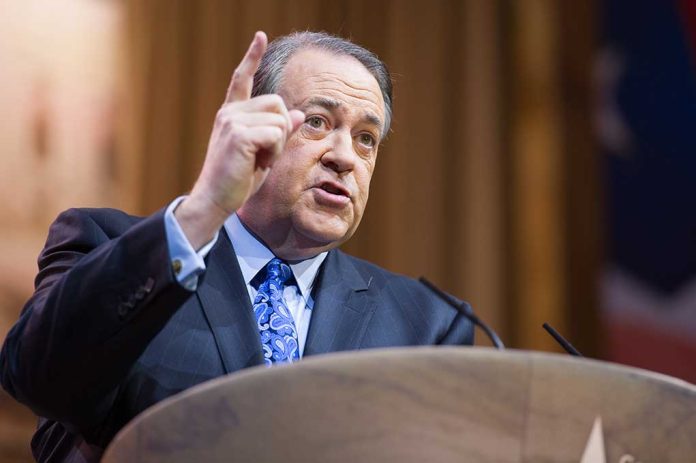 (UnitedVoice.com) – Protests against the Supreme Court are still raging, even though the Justices have taken their break. Activists, including members of Congress, were recently taken into custody at such a demonstration. Rep. Alexandria Ocasio-Cortez (D-NY) was among them, and a high-profile conservative is now speaking out against the congresswoman.

On Tuesday, July 19, Capitol Police arrested 16 members of Congress and more than a dozen others for blocking the street in front of the Supreme Court. When officers led AOC away, she placed her hands behind her back, seeming to wear handcuffs. The police did not, in fact, place legislators in restraints.

In a Twitter post, Mike Huckabee roasted AOC for wearing wool on a summer day, asking, “Does her COLD HEART toward the unborn need warmth?”

Why the heck is phony flaky AOC wearing heavy wool coat on 100 degree day? Does her COLD HEART toward the unborn need warmth?
AOC fakes being handcuffed after arrest at abortion rights protest https://t.co/RcVch35Ccj via @nypost

During an interview with “Fox & Friends First,” the former Arkansas governor pointed out that, unlike AOC, Donald Trump’s former adviser Peter Navarro was actually handcuffed last month when he was at Reagan National Airport. Huckabee accused federal authorities of frog-marching Navarro “across a federal courthouse lawn” even though his home is “50 yards from the front door of the FBI.” He called the two incidents a “double standard of justice” where the Left is allowed to do whatever it wants.

Do you think the former governor is correct? Are Conservatives and Liberals treated differently?