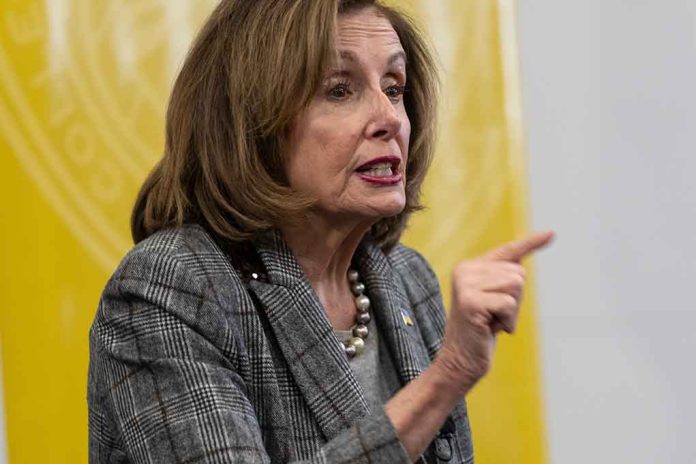 (UnitedVoice.com) – On Tuesday, June 21, Rep. Mayra Flores (R-TX) and her family attended her swearing-in ceremony. During the event, the new congresswoman took a photo with her family and House Speaker Nancy Pelosi (D-CA). Now, she’s accusing the Democratic leader of pushing her daughter.

Five days after the swearing-in ceremony, on June 26, Flores retweeted a slow-motion video seeming to show Pelosi nudging her child aside with her elbow as they are standing together for the photo-op. The new congresswoman praised her “strong, beautiful daughter” for not allowing the incident to bother her. She went on to criticize the Speaker for pushing her child aside for the picture.

I am so proud of my strong, beautiful daughter for not allowing this to faze her. She continued to smile and pose for the picture like a Queen.

No child should be pushed to the side for a photo op. PERIOD!! https://t.co/TA50EntDoq

During the ceremony, Fox News reported Pelosi thanked Flores for becoming a leader and welcomed her to the Capitol. The Texas representative made history serving as the first US representative born in Mexico. She also flipped a seat Democrats had held for more than 100 years.

On Twitter, Pelosi’s Deputy Chief of Staff, Drew Hammill, slammed media outlets for reporting the story. He accused them of misrepresenting her actions, saying she was just trying to reposition the congresswoman’s daughter.

It’s sad to see “news outlets” that know better misrepresent the Speaker’s effort to ensure Rep. Flores’ daughters wouldn’t be hidden behind her in all of the photos of such an important moment for their family. https://t.co/Dm0oXtwF7V pic.twitter.com/KDyI4MfaOj

Hammill didn’t explain why his boss chose to nudge the kid with an elbow rather than speaking to her like a human being and asking her to move over a little bit.