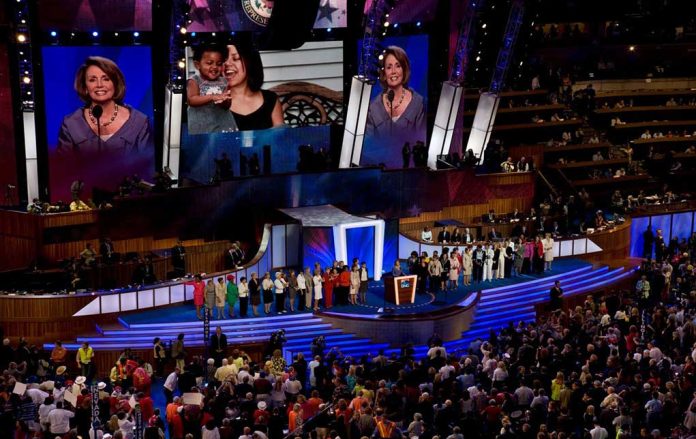 Speaker Nancy Pelosi is showing the world how immature she is, again.

Pelosi resorted to name-calling during a speech before the Illinois Democratic County Chairs’ Association. Ironically, this is the same behavior she and other Democrats have criticized Trump for in the past. This time Pelosi jumped on the “Moscow Mitch” bandwagon that Leftists had trending on Twitter recently.

Sure, maybe McConnell is the “Grim Reaper “ — the “Grim Reaper” of bad ideas. As expected, he’s taking the high road instead of lowering himself to Pelosi’s level. McConnell stated that he wants to have bipartisan discussions and actually do some work instead of calling each other names.

After laying low for more than a year, Henrico County Virginia’s TV Man is back in action once again. Doorbell surveillance footage showed him wearing an old-style box TV set on his head as he left over 50 TV sets on random porches in the middle of the night.

CAUGHT ON CAMERA: A man in Virginia was seen wearing a TV on his head and leaving old TV’s on people’s doorstep. pic.twitter.com/fEd3LNP2gK

Henrico Police believe that the TV Man is simply a college student pulling a prank and stated that the only law he is breaking is illegal dumping.

Tragedy befell a promotional taco-eating contest for the Fresno Grizzlies minor league baseball team. Mr. Dana Hutchings, 41, took part in the contest before collapsing to the floor. He was taken to a nearby hospital and died shortly thereafter.

Witnesses say he was eating the tacos whole without chewing and appeared to have choked. The official cause of death hasn’t been publicly announced.

Join us in sending thoughts and prayers to the Hutchings family.