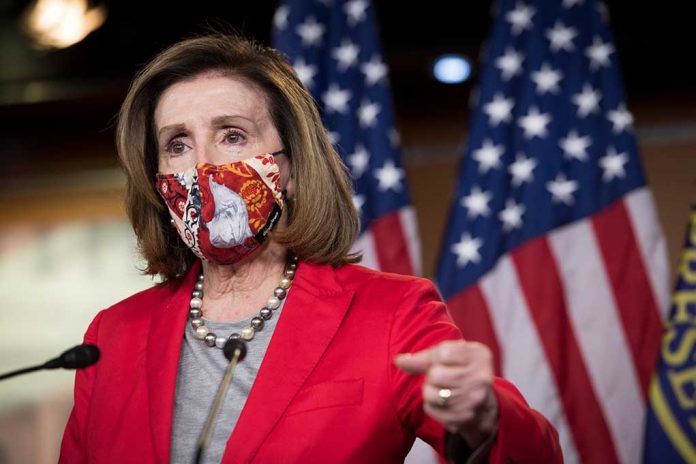 (UnitedVoice.com) – In 2020, during the height of the COVID-19 pandemic, Speaker of the House Nancy Pelosi (D-CA) approved proxy voting for lawmakers. She had to change House rules to allow the move. Representatives could do their work remotely for the first time in more than 230 years. Over two years later, she’s extended it once again.

On September 23, Pelosi wrote a “Dear Colleague” letter announcing she’d decided to extend proxy voting until November 10. The speaker cited a September 19 letter written by the Sergeant-at-Arms William Walker stating he’d consulted with the Office of Attending Physician, and they’d determined there was still an ongoing COVID-19 health emergency.

The decision came just days after CBS aired a “60 Minutes” interview with President Joe Biden, during which he declared the pandemic was over. “The pandemic is over. We still have a problem with COVID,” he said.

The same day Pelosi made the announcement, House Minority Leader Kevin McCarthy (R-CA) and his caucus rolled out their midterm agenda, entitled “Commitment to America.” The plan includes a provision to end proxy voting, saying it’s time to stop treating members of Congress like they’re special.

The Republican leader’s plan claimed the Democratic Party uses the proxy system to “get paid without ever needing to show up for work.” It alleges 90% of his colleagues on the Left have received their pay while working from home instead of doing their jobs on Capitol Hill.

Other Conservatives have claimed Democrats are voting by proxy simply because they want to campaign ahead of the midterm elections. Pelosi’s extension expires on November 10, just days after voting takes place. Rep. Thomas Massie (R-KY) alluded to the suspicious timing in a tweet.

The big guy said “C’mon man, pandemic is over.” Fully vaxxed can now get 5th shot. Nevertheless, Pelosi extends proxy voting due to “novel coronavirus” until the week of the election. pic.twitter.com/flMnBD7krt

Rep. Mike Gallagher (R-WI) released a statement drawing attention to the fact that Biden said the pandemic was over. He promised that if Republicans take back the House, they will “eliminate [the] unconstitutional and unethical practice.”

Republicans have decried the proxy voting system almost since its inception. In May 2020, the Congressional Institute called it an “unconstitutional oxymoron.” The think piece explained that the Constitution left Congress a lot of leeway in deciding how they wanted to run their chambers.

Yet, the Founders included a provision stating members of Congress must come together to form a quorum, or majority of members. The Institute argued that lawmakers should be physically present to create that quorum.

What do you think about yet another extension taking place?