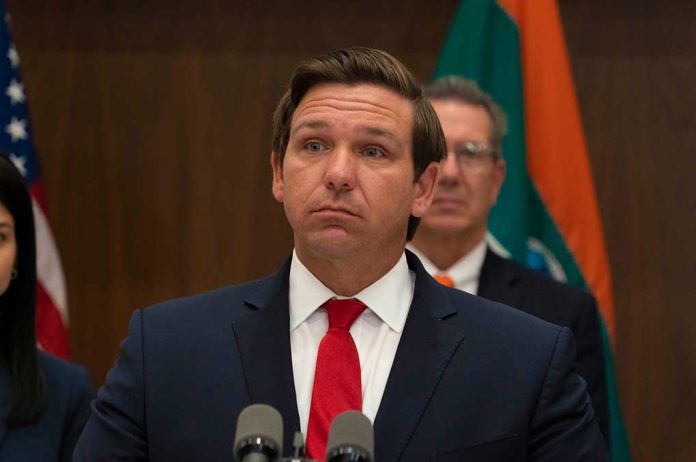 (UnitedVoice.com) – The Republican Party didn’t do well in the midterms. While they did manage to flip the House, it was by a very small margin. Democrats, on the other hand, managed to maintain control of the Senate by flipping retiring Senator Pat Toomey’s (R-PA) seat. They also flipped multiple gubernatorial seats, including Arizona and Maryland — but they failed to win Florida.

Governor Ron DeSantis (R-FL) was the shining conservative light on election night. A Red wave swept through the Sunshine State. Now, there’s more chatter than ever about the Republican powerhouse running for president in 2024 — and at least one poll is supportive of that possibility.

From November 11 to 13, the Club For Growth Action sponsored a poll conducted by WPAI Polls to find out how DeSantis and Trump would do in head-to-head races in New Hampshire and Iowa. According to the results, the Florida governor is leading the former POTUS by 11 points in Iowa, 48% to 37%. That is a major change from August when the poll showed Trump beating DeSantis 52% to 37%.

In the New Hampshire race, DeSantis is beating Trump by a 15-point margin, 52% to 37%. In August, the poll had the governor and former president tied with 45%.

The pollster also took a survey of voters in Florida and Georgia. Those in the Sunshine State are very fond of their governor. He has battled the establishment and Liberals in the state, winning every time. Unsurprisingly, he has led the former president in both polls in August and November. But in the most recent survey, he expanded his lead to 56% to 30%, up from 49% to 42% over the summer.

Despite his popularity, DeSantis hasn’t indicated whether he wants to run for president in 2024. In 2021, when the Fox News host Sean Hannity asked the governor if he planned to run for the Oval Office, he responded that he was busy trying to ensure “people are not supporting critical race theory.” He added he wasn’t “considering anything beyond doing” his job.

Hannity: Are you considering a run for president?

Ron DeSantis: "I'm not considering anything beyond doing my job… I want to make sure people are not supporting critical race theory." pic.twitter.com/RX3RB9fB7d

Donald Trump, on the other hand, announced his intention to run on Tuesday, November 15, so this head-to-head could very likely become a possibility.

Who would you support on a 2024 presidential ticket?

November 7, 2022
United Voice reviews hundreds of articles each day to bring you just the most important articles of the week and stimulate independent critical thinking around the issues that matter. United Voice will attempt to cut through the noise, summarize key concerns, and present alternative viewpoints along with independent commentary and reader comments.