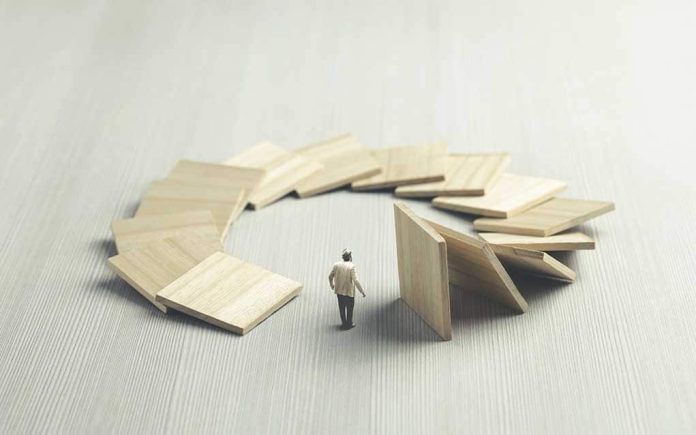 (UnitedVoice.com) – For the first eight months of Joe Biden’s new presidency, most Americans gave the president a positive job approval as he settled into office. In August, voters flipped the switch fast and hard. Since then, his approval ratings have eroded among independents who decide most elections. Even some Democrats are souring on Biden’s job performance.

Every poll since August consistently shows Biden’s troubles aren’t just on one issue. Could it be that in 2020 Biden sold himself to the public as a Moderate who defeated the Socialist, then turned on Moderates once in the White House and embraced the far-Left? Based on failure after failure of the administration as it adopted virtually every far-Left position, that’s entirely possible. The Democrats under Biden went so far left, one prominent New York Times columnist is calling out the Democrats for going too far left.

On Wednesday, October 20, Fox News released a brand new poll, and the news is not good for Biden or Democrats. Just one month ago, Biden was in positive territory on the economy (50% approval, 49% disapproval). Now, he dropped a stunning 20 points (39% approval, 59% disapproval). The massive shift comes as Democrats dropped 11 points and Biden lost 15 more points among independents.

Spelling potentially devastating news for Democrats seeking re-election in 2022, the poll said people were “Extremely” or “Very Concerned” about the following issues:

In addition, 71% of respondents said they experienced empty grocery shelves. Half of voters say they could live on their savings for three months or less.

Did Democrats Overplay Their Razor-Thin Majorities?

In the House, Speaker Nancy Pelosi (D-CA) only has a three-vote margin. The Senate is even tighter as it’s evenly divided between Democrats and Republicans. In 2020, incumbent House Republicans successfully defended every seat and flipped 16 Democratic seats. The GOP expected to lose seats. If Democrats were paying attention after the election, the mood of the country was not leaning far-left.

The Fox News poll suggests voters are unhappy about the partisan push to pass a semi-socialist proposal on a party-line vote. By a two-to-one margin (60% to 31%), voters want lawmakers to compromise across party lines instead of going it alone.

On Wednesday, Quinnipiac University released a survey that mirrors the Fox News poll. Only 37% of Americans approve of Biden’s job performance, and 52% give him a thumbs down. In a trend that is worsening, only 28% of independents approve of Biden’s job performance. Quinnipiac suggested the top issues driving voter anxiety are the economy and immigration.

How Bad Is It for Democrats?

New York Times famed columnist Thomas Friedman called out the Democrats for going too far left. A liberal who is clearly opposed to the GOP, Friedman said on issue after issue, the Democrats are abandoning the majority of Americans. Check out Friedman’s interview on CNN:

Tom Friedman says Democrats should be doing much better given the disarray of the GOP.

“The party has gone too far to the left for this country that is still center-right and center-left,” he says. “Democrats should be asking themselves ‘how the hell could we be losing?’” pic.twitter.com/iyoPMb6G9p

On economic issues, Friedman said, “My God, people don’t want Democratic Socialism.” He said Democrats are too focused on free stuff that costs trillions of dollars while holding a bipartisan infrastructure hostage and holding back the economy. Friedman said he believed, whether right or wrong, the GOP is in disarray. Yet, he questioned, “How in the hell could we be losing…?“

The answer is simple, and Friedman’s initial gut instinct was right. America is a center-right country. It’s not a socialist country that wants the government to care for people from the cradle to the grave.

Democratic leaders repeatedly state they believe their fortunes in 2022 are tied to passing their massive semi-socialist spending proposal. It appears voters are trying to tell them otherwise. Will they listen?