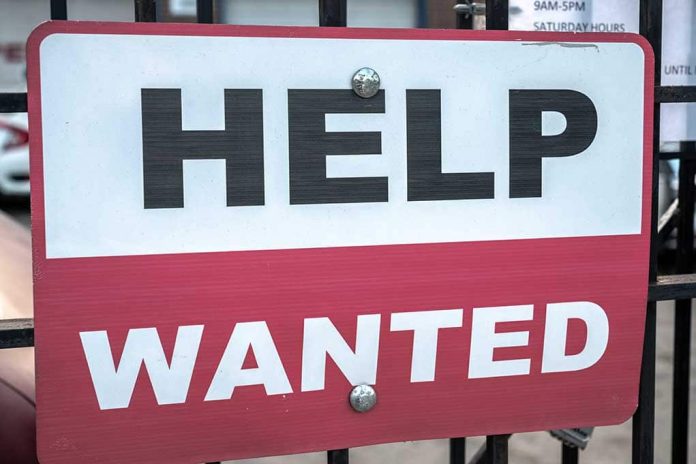 (UnitedVoice.com) – For centuries, work was a pillar of societal success. Many believed work contributed to a healthy and productive society and kept people from becoming bored and kept them out of trouble. Many stubbornly taught that if one wanted to eat, they needed to work for food. Since the 1960s, there has been an evolution of thought regarding the value of work.

A new study by the Joint Economic Committee Republicans sought to understand the relationship between government safety net programs and a decades-long departure from the workforce. Today, America is experiencing a shortage of workers in various professions, and the shortage is contributing to empty shelves across the country. The study suggests there is a clear pattern between Liberal policies and the lack of workers.

So, did the pandemic cause the current employment crisis, or did it expose it?

Did America Focus on the Wrong Thing?

The media, politicians, bureaucrats, and the public focus heavily on the unemployment rate. Economic theory suggests fewer people collecting unemployment benefits means the economy is strong and healthy. In 2016, Americans sensed something wasn’t adding up as parts of the economy struggled eight years after the Great Recession. The unemployment number wasn’t high, but another metric was shocking.

Nearly 95 million people weren’t participating in the labor workforce. These people used all their unemployment benefits and no longer qualified for the benefit, retired, or stopped looking for work altogether. According to the US Bureau of Labor Statistics, the labor force participation rate peaked in 2000. Since then, it has trended down among all groups by age, race, and gender.

While the country focused on those receiving unemployment benefits, it ignored data showing nearly a third of the country wasn’t working for one reason or another. To those in financially plush Washington, DC, it didn’t make sense that tens of millions of people were experiencing a different reality because no one was talking about it outside of Conservative media. The economic reality of nearly 100 million people led to the election of Donald Trump that year.

Why Aren’t People Looking for Work?

The question is, what is causing people to stop pursuing work? According to the study, the trend began developing 50 years ago. In 1955, the labor force participation rate among men was a healthy 97%; by contrast, just before the pandemic, it was 89%. Sen. Mike Lee (R-UT) wrote that the phenomenon of people voluntarily leaving their jobs could be directly traced to growing government assistance programs.

The study said only 12% of able-bodied unemployed men of prime age wanted a job. For those not working for reasons other than disability, retirement, education, or homemaking, 41% were on government assistance programs.

Don’t miss this: The problem didn’t start during the pandemic. From 2017 to 2020, there were more jobs available than people to fill them. Employers increased wages across the board and added other incentives to attract people to their open positions. Even that didn’t work.

The report said politicians should remove financial disincentives and lift barriers to work to solve the problem. Yet, Democrats in Congress are pushing to increase the social safety net. The result is more government dependency and declining quality of life.

America’s work values didn’t change overnight. They’ve been changing for decades. Is it too late to reverse course?

Try taking away a government benefit and see what happens.