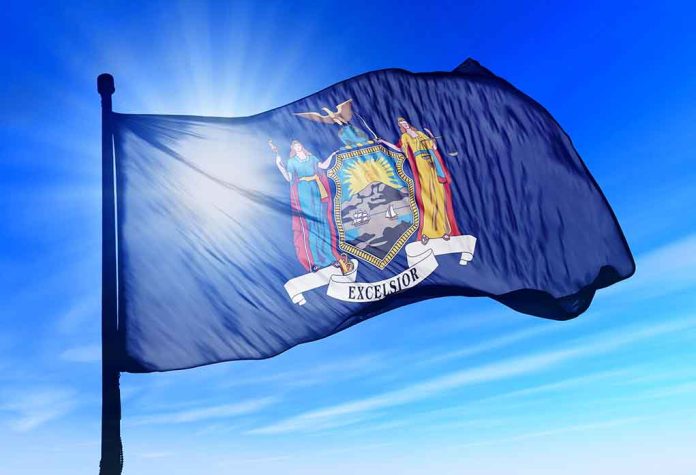 (UnitedVoice.com) – Over the last year, Democrats made up all kinds of stories about supposed voter suppression in GOP-led states. In March 2021, Georgia passed a voter reform law that made voting more accessible and cheating by partisan activists more challenging. Arizona and Texas followed. Federal courts up to the US Supreme Court found lawsuits filed by Democratic activists were without merit. Yet, the Democratic outcry continued.

For months, some have questioned why the Democrats weren’t upset about voter suppression in President Joe Biden’s home state of Delaware. Along with New Jersey, New York, Connecticut, Rhode Island, and Massachusetts, these states have highly restrictive voting laws much worse than any GOP-led state. In Connecticut alone, it’s virtually impossible to vote by absentee ballot, and there’s no such thing as early voting. Democrats and the liberal media appear silent once again now that the New York Democratic supermajority passed the most egregious congressional map since the early days of the practice during the country’s founding.

Currently, Democrats only have a five-seat majority in the US House of Representatives. It’s the slimmest margin in nearly a century. Polls suggest a red tsunami may appear this November that could give Republicans an overwhelming majority less than a year from now. So, the Democratic response is if they can’t beat Republicans, they’ll try to rig elections where they can to minimize the damage or possibly protect their fragile majority.

Currently, Democrats hold a 19-8 advantage over Republicans in New York’s congressional delegation. On Sunday, January 30, the legislature finalized their congressional map for the next ten years. It would increase their advantage to 22-4. It could even be as little as 3 for Republicans. The map is so egregious it gives a new meaning to the word “gerrymander.”

How Did Democrats Squeeze Out New York Republicans?

The congressional districts shaped like snakes, crossing numerous waterways and dividing communities fill the congressional boundaries. The worst offender might be the district for anti-Trump Democratic Rep. Jerry Nadler (D-NY). The new map is still very safe for him, but it eats significantly into Rep. Nicole Malliotakis’ (R-NY) current district, making it nearly impossible for a Republican to win in the newly formed heavily Democratic district. All one needs to do is look at the absurd boundaries in the tweet below:

Extends from Manhattan’s West Side down into Borough Park in Brooklyn, and takes a pretty windy path to get there pic.twitter.com/xvo9rbHAQR

New York Democrats say they must comply with standards that drive their decision-making. They say it shouldn’t surprise anyone a supposedly fairly-drawn map reflects a deep blue state. However, redistricting experts say that line of thinking is off base. Joe Biden won 60% of the statewide vote in 2020. Yet, the new congressional map gives Democrats control of 85% of districts.

The bill will head to New York Gov. Kathy Hochul’s desk for her signature, making the congressional map officially legal. Expect numerous lawsuits over the gerrymandered map. While the legal challenges may be the news in the coming weeks, they’re not the real issue.

Democrats in New York undercut their national party’s message of voter suppression. It’s hard to argue that when Democrats just suppressed the vote of hundreds of thousands of New York Republicans.

Once again, Democrats undermine and contradict themselves.