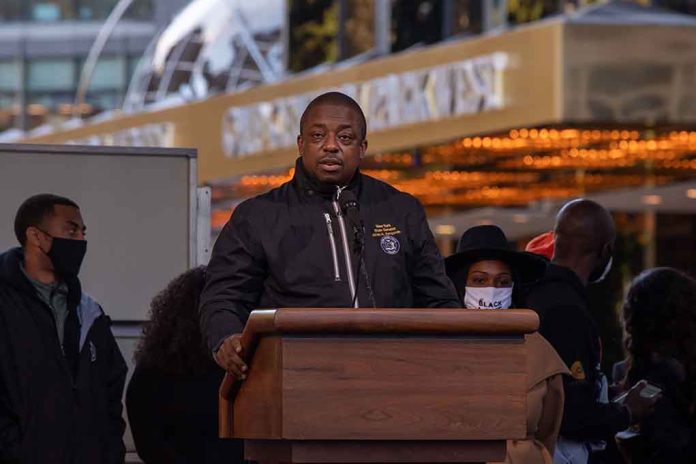 (UnitedVoice.com) – Over the last year, New Yorkers have dealt with corrupt acts by high-level politicians. The most notable occurred in August 2021 when former Governor Andrew Cuomo (D) resigned in disgrace over sexual harassment allegations. The state legislature was also investigating the former governor over his handling of nursing homes in the early days of the COVID-19 pandemic.

On Tuesday, April 12, the Department of Justice (DOJ) revealed its investigation into New York Lieutenant Governor Brian Benjamin (D) on suspicions of corruption. Prosecutors allege Benjamin used his office and authority as a New York State Senator to engage in a campaign fraud scheme. Benjamin resigned from office, effective immediately, just hours after his arrest.

In 2021, Governor Kathy Hochul (D) appointed Benjamin as her lieutenant governor in the wake of Cuomo’s resignation after she ascended to the governor’s mansion. Hochul said both she and Benjamin agreed he couldn’t serve in high state office while dealing with the federal criminal complaint against him. She stated New Yorkers deserve to have confidence in government, and she would continue working every day for the state’s citizens.

This year, Benjamin campaigned to continue serving as the Lt. Governor. It appears those aspirations are on hold. Benjamin surrendered to federal authorities and appeared before a federal judge on Tuesday afternoon. His attorneys acknowledged Benjamin’s resignation and said he’s suspended his election campaign to focus on the charges. The attorneys added Benjamin is innocent of the charges and will explain to the court how his actions were praiseworthy, not criminal — and that the politician expects to return to public service after proving his innocence.

What Are the Charges?

The federal indictment alleges Benjamin received campaign donations from a Harlem real estate developer in exchange for a $50,000 state grant while running for State Comptroller in 2019. The indictment recognizes the developer never received the grant money. The complaint alleges the developer gave the then-state Senator two $10,000 checks in the names of relatives who didn’t have the same last name as the businessman to conceal the contributions and get around ethical and legal issues. Additionally, the developer gave the campaign $5,000 from a limited liability company registered in the developer’s name.

The complaint added the Lt. Governor worked to cover up the scheme and alleges Benjamin engaged in lies and deception. Benjamin faces charges of bribery, conspiracy, honest services wire fraud, and falsification of records. The offenses carry maximum penalties of between five and 20 years each.

Benjamin says he did nothing wrong.