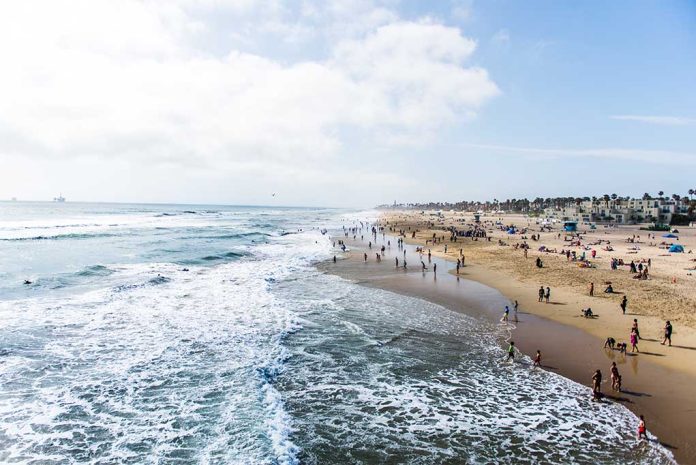 (UnitedVoice.com) – California has been having a tough few years on an environmental level. Millions of acres of land have burned. There’s a persistent drought happening. Now, the state is facing another catastrophe — an oil spill.

126,000 gallons of oil spilled into California's Pacific waters, killing fish and wildlife. Some beaches may close for weeks.

The leak appears linked to a 1980s-built platform. Federal waters have 40,000 miles of pipelines and watchdogs report lack of action on aging structures. pic.twitter.com/MVHoPqY27g

On Friday, October 1, an oil pipeline leak caused roughly 144,000 gallons of oil to spew into the Pacific Ocean. The disaster happened five miles off the coast of Huntington Beach. Orange County Supervisor Katrina Foley told CNN the oil spill has significantly impacted nature preserves. The California Department of Fish and Wildlife raced to stop the oil from infiltrating seven sensitive environmental sites along the coastline, including the Talbert March and Bolsa Chica Ecological Reserve.

Unfortunately, Foley said the oil has already started to damage the Talbert wetlands, an area the Army Corps of Engineers and county officials have been working to save for decades. She said dead fish and birds are also washing up on beaches in the area.

According to a USA Today report, nobody warned the millions of people at Orange County beaches the day after the first report of a spill off the coast. Some residents are now demanding accountability. UC Irvine professor Donald Blake, an atmospheric chemist who studies air pollution, said authorities should have notified residents sooner, including the 1.5 million people at the air show that day, to let them decide how to best protect themselves from possible exposure. Yet, despite complaints from Newport Beach and Huntington Beach shop owners saying they smelled tar, people were still not notified until late Saturday.

The investigation into what caused the leak is underway.