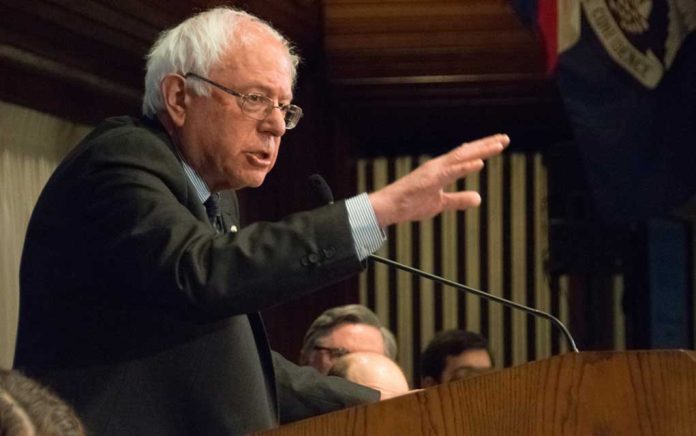 (UnitedVoice.com) – America was built on opportunity, incentives and hope — not free healthcare, free college, or student loan debt elimination and especially not on government dependency.

America itself was a risk in 1776. The men who forged a nation signed a document pledging their lives, treasures, and sacred honor. They wrote and signed the Declaration of Independence declaring that every American has the right to life, liberty and the “pursuit” of happiness.

Their idea of happiness was the removal of a dictator so they could pursue the opportunity of a better life without the constraints of a burdensome government that was forcing dependency upon its people.

The principles of opportunity, hard work, incentives for hard work and risk are deeply rooted in our culture.

Many Democrats might be realizing the consequences of Sen. Bernie Sanders (D-VT) socialist movement and could be waking up to his destructive philosophy and policies.

Sanders has been an admitted socialist for over four decades. He has supported communist dictators in Cuba, Venezuela, and Nicaragua. He has also championed socialist programs that could cost upwards of $100 trillion over ten years.

Sanders loves to say that he’s for the little guy, the working people, the marginalized, and the disadvantaged.

It sounds noble until you realize that he’s not for allowing them an opportunity to pursue the life they want or the future they dream of — however they can honorably get there.

Instead, he’s for trapping them in government dependency.

The worst part is, it’s all based on a lie.

The lie is that he will soak corporations and the rich to give everyone free stuff — and young voters are eating it up.

The problem is all that “free” stuff will cost over $100 trillion over ten years and Sanders admitted on “60 Minutes” last Sunday night he doesn’t know how to pay for it?

Consider this… there isn’t enough wealth in the United States to pay for his proposals and Sanders knows it.

The United States currently has a $21 trillion deficit.

It doesn’t take a rocket scientist to see the problem.

Beyond the obvious, the real problem is that when his policies collapse the economy the very people he claims to be helping are the ones who will be hurt.

Perhaps Democrats Are Figuring Out They’re Being Duped?

Sanders loves to say that Donald Trump is the greatest existential threat to the United States. It’s interesting to me that Trump has expanded opportunities, created new jobs, fought for religious rights, and is ending the war in Afghanistan.

If that’s a threat — I fully support it.

Am I supposed to believe that someone who would radically transform the United States into a failed socialist state is less of an existential threat than Donald Trump?

The more Americans, including Democrats, listen to this guy, the more they may be starting to wake up to the dangers he poses to the country and the freedoms and liberties we enjoy.

All you have to do is look at what happened in South Carolina and in 10 of the 14 Super Tuesday states. Former Vice President Joe Biden cleaned Sanders’ clock.

Democrats who aren’t where they want to be have hopes and dreams.

When you destroy the job creators, entrepreneurs, inventors, and innovators you destroy incentives to work hard, opportunity, and hope.

Maybe Democrats are finally starting to wake up to the reality of Sanders’ socialist movement? We can only hope they do before it’s too late.

The above article is solely the opinion of the author and may or may not represent the views of the publisher.