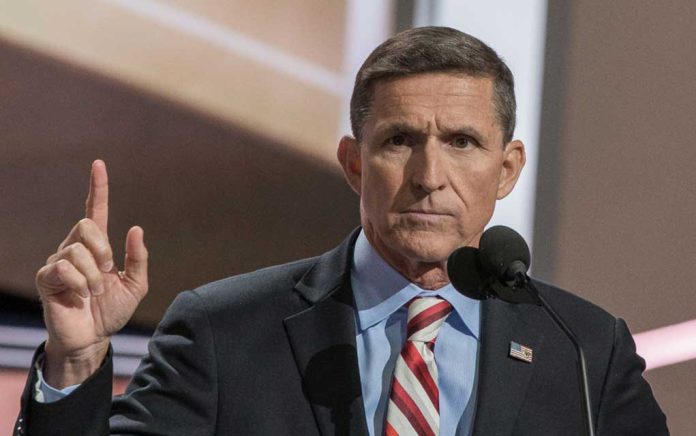 (UnitedVoice.com) – The fix is in. Democrats, the deep state, and the mainstream media have been trying to figure out how to get rid of Donald Trump. But, they somehow keep missing the mark. They tried the Russian hoax, impeachment, and making an example out of Brett Kavanaugh. Now, new revelations have surfaced of how the highest levels of the FBI set a trap to get former national security adviser Michael Flynn to turn on President Trump.

Yes, the fix is in. People at the highest levels of government created a process that was rigged behind the scenes in which its outcome will not reflect true justice.

We live in perilous times. Veteran employees at the highest level of government have sought to destroy Trump and his agenda from day one. In doing so, they undermined their work, their credibility, and set a precedent that threatens the security and liberty of every American.

Shameful is not a word that even captures what they have done to themselves and the country.

This week, explosive new documents revealed the depth of deception the FBI used to trap Flynn and “fix” the voter’s mistake in electing Trump. It should make every American scared to death to ever be in the crossfire of the government.

In 2017, Flynn was pressured by the FBI to admit he had conversations with Russia’s ambassador before Trump’s inauguration. Never mind that it’s not illegal and doesn’t violate the Logan Act (which has never been prosecuted). Flynn admitted under duress of lying to the FBI but has since recanted.

Handwritten notes provided to Flynn’s legal defense team revealed the FBI’s goal was to get him to lie, so we can prosecute him or get him fired.

#FLYNN docs just unsealed, including handwritten notes 1/24/2017 day of Flynn FBI interview. Transcript: “What is our goal? Truth/Admission or to get him to lie, so we can prosecute him or get him fired?” Read transcript notes, copy original just filed. @CBSNews pic.twitter.com/8oqUok8i7m

Utterly shocking and frightening are the only words I have. Leaders in the FBI, CIA, and other government agencies sought out to destroy the president and anyone around him. Flynn’s case should be dismissed immediately. Then, an investigation should ensue to determine the players of this game and how deep the treason went.

Yes, treason. The actions of the FBI went beyond one’s First Amendment right to free speech or to protest the government. Before anyone says those in the government have a right to resist if they don’t agree with the president – they are wrong. They didn’t exercise their right to free speech or protest the government openly as individual citizens. This was an abuse of government power to coerce someone to admit to something they did or did not do. They “fixed” a process to ensure Flynn would turn on Trump, even if it meant Flynn had to lie to do it.

What happened to Flynn is a form of government oppression and should never be tolerated!

Americans should be able to trust their government. Unfortunately, the government has broken that trust. It’s obvious that justice was not the goal when the FBI set up Flynn. The government agency brazenly went after a top appointed official close to the elected President of the United States over political differences.

What does that mean for you and me if they decide they are wiser than we are? We should all be concerned about the Flynn situation if we love liberty, freedom, and rooting out corruption in government. The fix is in. This time it’s the former national security adviser. Next time, it could be an ordinary citizen.

The above opinions are solely that of the author and do not necessarily reflect the opinions of the publisher.