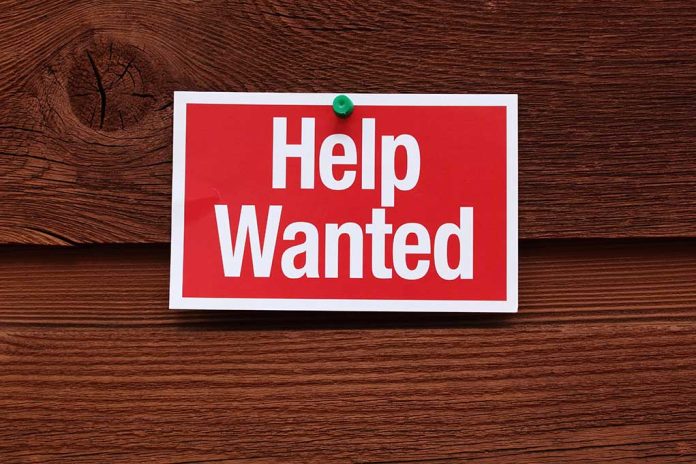 (UnitedVoice.com) – If you listen long enough to President Joe Biden, he’ll sell you a boat in Arizona. You gotta give it to the guy, he’s trying to paint a rosy picture that all is well even while Americans can clearly see through his lies. On Wednesday, November 10, the president spoke at a port in Baltimore, Maryland. He tried convincing us the economy isn’t as bad as it seems, but for those in America living through it, it’s not good.

The picture Biden paints is one where Americans are spending so much money the supply chain can’t keep up with it. Inflation isn’t going to last despite the reality it’s been rising quickly since March when Biden first told us it was “transitory.” Oh, and he loves to tell us how unemployment is coming down. Here’s the problem: it’s not the entire story. The one he’s not telling is much worse than many realize.

What Is Biden Hiding?

In 2016, then-Democratic presidential nominee Hillary Clinton didn’t acknowledge the economic reality facing tens of millions of Americans. Donald Trump seized on a message that China stole our manufacturing jobs and establishment politicians empowered China to do it. To support the claim, he pointed at a powerful, obscure number.

The Department of Labor tracks working-age people and how many are not participating in the labor workforce. The number is separate from, and does not include, unemployment. Here’s why: those out of work and actively looking for a job receive unemployment compensation. Yet, the labor workforce participation rate includes those who aren’t working or looking. Several qualifying reasons may exist, like no longer qualifying for unemployment, not looking for work, working part-time, retiring, etc.

Like Clinton, Biden is completely out of touch with what’s happening outside of his Washington, DC, bubble. He was once considered a man of the middle class, but “Lunch Bucket” Joe doesn’t even know how much lunch costs these days.

Over 100 Million Americans Not Working

According to the US Bureau of Labor Statistics, less than 62% of working-age Americans are actually working. That means 100,450,000 people were not in the workforce in October. That’s up 38,000 from September. It’s the 14th straight month the Labor Department says over 1 million working-age people weren’t employed.

So, what does this mean? It means people either stopped looking for work because the government freaked them out over the last 14 months, they’re home taking care of kids who are not in school, went back to school, or retired early.

This scenario begins to make a little sense as some struggle to understand why there are millions of job openings, but no one is applying for them, especially in supply chain critical fields. Truck drivers alone are in massive demand as trucking companies experience a shortfall of as many as 80,000 drivers.

There is also one thing reflected in the number not reflected anywhere else. How many people are not working because their employer required a COVID vaccination, and they chose not to get it? For months, healthcare companies and hospitals let people go because they didn’t comply with company vaccination mandates. These people do not qualify for unemployment in most cases. While perfectly legal, it could present a drag on the economy. If Biden’s workplace mandate takes effect on January 4, it could cause the number to balloon even more.

While the president tries to spin a narrative the economy is in good shape, and people are heading back to work, that’s not necessarily true for 100 million people.

The question is, will Virginia be the tip of the iceberg in the upcoming 2022 midterm elections? According to exit polls, the economy was the top issue on voters’ minds when they cast a ballot and flipped the governorship, lieutenant governorship, and statehouse red for the first time in over a decade.

Hold on tight. It could be a bumpy ride.