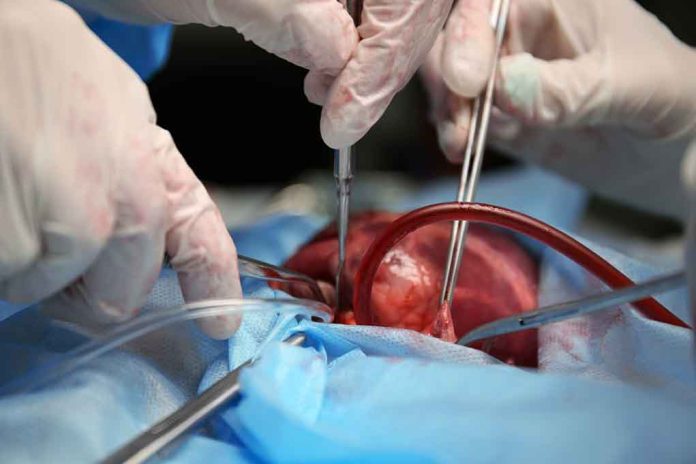 (UnitedVoice.com) – For more than a year, there’s been a disagreement about whether private and public institutions can mandate the COVID-19 vaccine. Most of the controversy has focused on workplace directives. However, a Massachusetts man just learned the fight has extended to the organ transplant list.

D.J. Ferguson, 31, is fighting for his life at the Brigham and Women’s Hospital after undergoing open-heart surgery on January 24. The 31-year-old father of two (with another on the way) was admitted to the hospital after suffering heart failure. Several years ago, he was diagnosed with an arrhythmia and put on the heart transplant list. Ferguson was reportedly at the front of the line for a transplant but when the hospital learned he hadn’t received the COVID-19 vaccine, they pulled him from the list.

Tracey Ferguson, D.J.’s mother, told NPR that her son isn’t against the vaccine. He has received others. However, he wants reassurance from his doctors that this particular vaccine won’t make his condition worse or fatal.

The hospital has declined to comment on D.J.’s case but pointed to a response on its website that explains the COVID-19 vaccine is one of several required by nearly all transplant programs. Transplant recipients are at a higher risk of death from viral infections because their immune system is wiped out by the anti-rejection treatments they must undergo. They’re also at a higher risk of dying from the COVID-19 virus.

The requirements on the transplant list are allegedly to ensure organs go to people who have the best chance at survival. But what about when those policies condemn a patient to death?

While D.J.’s family fights to get him back on the list, his doctors are doing their best to stabilize him temporarily. He’s received a heart pump in the meantime.

Do you believe the COVID-19 vaccine should be a requirement for organ transplant surgeries?