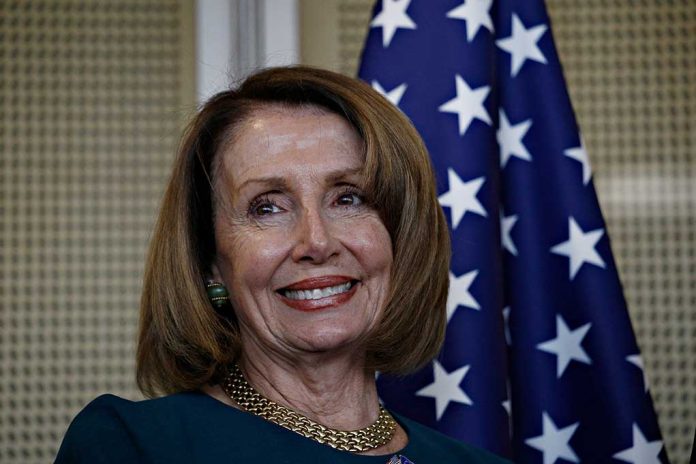 (UnitedVoice.com) – House Speaker Nancy Pelosi (D-CA) has launched a new attack on the Republican Party over January’s Capitol riots – and, in what looks like an attempt to create division in the GOP, she’s also praised rebel congresswoman Liz Cheney (R-WY).

In a May 5 interview, Pelosi told Judy Woodruff of PBS that the Republican Party is “in strong denial” over the storming of the Capitol Building on January 6, claiming that many House Republicans won’t accept what happened. She claims that Republicans won’t even approve supplemental spending to repair damage to the building, saying, “they’re, like, why do we have to fix the windows and doors? Like, what happened on January 6?” In fact, Republicans in Congress have been vocal in condemning the riots.

Pelosi went on to claim that Republicans are trying to unseat Cheney because she was “very courageous in speaking truth about what happened on January 6.” The reality is that most of the Republican Party is still solidly behind former president Donald Trump, and Cheney sparked widespread anger when she joined Democrats in voting to impeach him.

However, that’s actually a side issue. More seriously, there’s concern about Cheney’s ability to do her job as House Republican Conference Chair – serious enough concern that House Minority Leader Kevin McCarthy (R-CA) wants her replaced. That’s why many in the party are pushing to find a more loyal candidate to contest her House seat.

On May 4, Pelosi’s office released a spoof “Help wanted” ad for a Cheney replacement. The fake ad, posted on Pelosi’s virulently partisan blog, called for “a non-threatening female” to take over from Cheney. It claimed the House GOP members want Cheney replaced for “a litany of very Republican reasons: she won’t lie, she isn’t humble enough, she’s like a girlfriend rooting for the wrong team.”

On the campaign trail, President Biden claimed he would bring America back together. Instead, we have the most partisan administration ever – and even the Democratic Party finds itself increasingly split between its moderate and far-left wings. Only the GOP is still unified. Is it any wonder that now, Pelosi would try to splinter that too?