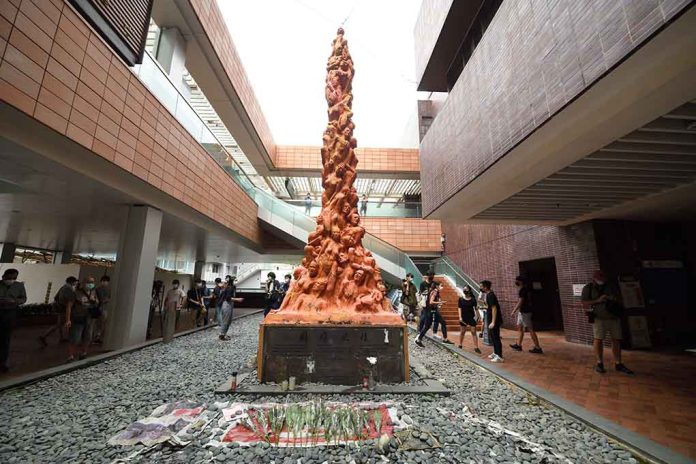 (UnitedVoice.com) – The nature of the Chinese government is to put forth the best possible image of the country. Often, this includes censoring what goes into the news and covering up unflattering incidents.

The 1989 Tiananmen Square protests are an example of an incident the government would rather forget. In an attempt to erase history, the country has strict rules about publicizing the event in any way. Despite this, some monuments persist, but one of the best-known is now gone thanks to a secret overnight removal.

The statue, Pillar of Shame by Jens Galschiot, marked the event through the artist’s rendition of the horrors the protestors withstood and as a memorial to those who died. It shows a pile of faces with ghost-like anguished looks. One of the few remaining markers paying tribute to the 1989 protests, the monument sat on the University of Hong Kong property for 24 years before its removal in the dead of night on December 22.

The university closed the area to hide workers cutting it apart, removing it, and placing it in a shipping container.

The government ordered the removal in October. Hong Kong officials said the statue had to go because external legal advisors suggested it was in the school’s best interest to do so. Legal counsel advised the school that keeping the artwork would potentially breach the crimes ordinance.

The Chinese government has worked to silence anything about the event. It blocks media access to Tiananmen Square and censors talk in the media and the Chinese internet. Laws also exist to keep people from bringing any attention to the event.

The incident occurred in 1989 when students gathered in Tiananmen Square to demonstrate in favor of democracy and free speech. The actions followed the death of a former leader who tried to introduce democracy to the country.

Over a million protesters joined the effort. They were fed up with the one-party rule and wanted more freedom, especially journalistic freedom.

The government stepped in as the movement grew. On May 20, officials declared martial law, and troops entered the area. The military did little to halt the protests until June 4, when soldiers and police started firing into the crowd and tanks rolled into the square.

Protestors fought back, but estimates are that thousands lost their lives, and up to 10,000 ended up under arrest.

The world watched as the events unfolded through live broadcasts, and leaders around the globe condemned the actions of the government. It was a dark event in Chinese history the current government wants to pretend never happened.

The artist, Mr. Galschiot, has tried numerous times to retrieve the statute because he claims it’s his personal property. He claims he never relinquished ownership but simply allowed the piece to sit on display on university property.

The university said it’s following up with legal counsel but noted it never approved the monument’s display on the campus. In the meantime, Pillar of Shame sits hidden away in a storage facility so the government can hide its less-than-perfect past.