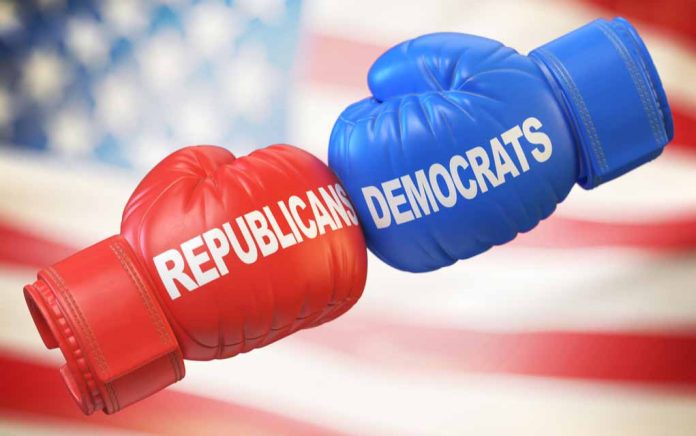 (UnitedVoice.com) – America is now barrel rolling towards the November 2022 midterm elections. The nation’s first primary will be on March 1 in Texas, and the majority of states will determine who’s running in the general elections by mid-May. Some stragglers will follow behind through the summer. During the primaries, Republican challengers eager to take on incumbent Democrats are sharpening their debate skills, ready to show voters the truth about the candidates on the left.

In 2021, the far-left flexed its muscles and finally took over the Democratic Party. While most Democrats claim they’re moderates, neither their rhetoric nor voting record suggests that’s true. Independent voters are fleeing Democrats in one of the fastest political busts in American history. Democrats are deathly afraid of what’s to come in the midterm elections and are virtually powerless to stop it. It seems their only defense is to attack Republicans as alarmists. Yet, it would appear voters should be alarmed.

Bad leadership always results in bad outcomes. In 2021, President Joe Biden, House Speaker Nancy Pelosi (D-CA), and Senate Majority Leader Chuck Schumer (D-NY) bet all-in on the far-left plan to transform America. They employed heated racial and economic rhetoric to target the GOP, expecting extreme labels would force Republicans to back down and comply. Yet, Democrats always had a numbers challenge. They governed as though they had a mandate from voters, but they didn’t.

Now, Democrats are likely to pay a steep price.

Not only did the Left’s efforts blow up in their faces, but it could also cost them the opportunity to lead for a generation or more. Democratic Sen. Joe Manchin (D-WV) repeatedly warned that his own party was contributing to the widening schism in America. He continually warned the party he would not vote for extreme policies creating massive government entitlement programs that trapped people in dependency and climate change proposals that were impossible with current technologies. His party ignored him despite his warnings, knowing the legislation was likely to fail in a 50/50 Senate.

Why Are Republicans Poised for Big Wins in November?

Not only did Democrats collapse, but the only hard-committed voters who remain in their circle are also far-left, woke, White voters. Sure, they still have the majority of Black voters for the moment. Still, that’s been shifting for five years. They hoped to build a coalition of Hispanic voters who would turn them into an empire for generations. That failed as well. Now, half of all Hispanic voters are in the Republican corner. So much for those hopes.

Republicans are already positioning to make the case about Democratic policies that are an abysmal failure. Let’s look at a few policy examples Democrats can’t run from:

Republicans Are the Real Winners

So, the Democratic Congressional Campaign Committee says their problem is an easy fix. They just need to message better. Good luck with that one. They focused on the Left’s ideology instead of voters’ concerns.

Democrats don’t have a messaging problem. Their message is exactly who they are, and they haven’t hidden from it. Instead, America has a message for them. Most voters don’t like what they saw, heard, and experienced in 2021. Democrats can’t demonize people and expect unity as Biden promised. They can’t run the government on extremes without a mandate, and Moderates can’t hide from their votes supporting left-wing legislation.

They are on record. No amount of messaging solves that problem. In fact, it only reinforces why moderate Democrats don’t deserve to be in power. They misled their voters by following the party line instead of constituent interests.

Perhaps no one said it better than former Obama White House advisor David Axelrod. In a New York Times op-ed published on February 14, Axelrod said the Democrats, under Biden, need to stop talking about gains made when people’s lives say otherwise. He said that makes them appear out of touch with voters. He added Democrats couldn’t coerce people into believing something they know isn’t true.

Therein lies the messaging problem for Democrats. They have a message. It just benefits Republicans this fall and perhaps for a generation to come. You can bet the Left is dismayed and doesn’t understand. That’s what happens when one lives in an isolated bubble.