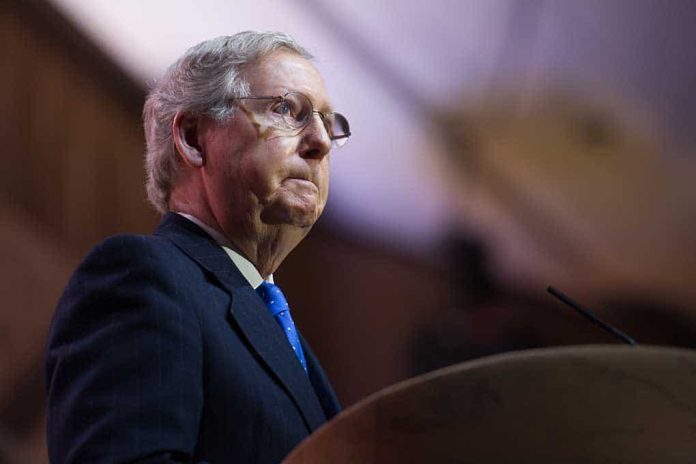 (UnitedVoice.com) – For several months, the US Treasury Department warned Congress the debt ceiling would need to be raised by the middle of October to avoid a US default on its debt. As the Democrats set a proposal in motion to spend $3.5 trillion to transition America’s capitalist system to become a hybrid-socialist one putting more people on government dependency and put a down payment on the Green New Deal, the GOP refused to support raising the borrowing limit. For two months, Senate Minority Leader Mitch McConnell (R-KY) told Democrats they would need to extend the debt ceiling on their own if they insisted on unilaterally passing controversial and reckless legislation.

On Wednesday, October 6, the winds appeared to change direction for McConnell. He huddled with several Senate moderates and devised a plan to extend them a lifeline. On Thursday, 11 Republicans voted with all 50 Democrats to break a filibuster, allowing Democrats to raise the debt ceiling by $480 billion. In the aftermath, numerous Republicans blasted McConnell. Senate Majority Leader Chuck Schumer (D-NY) blasted Republicans as his thanks while one Democratic Senator sat in disbelief.

According to the Treasury Department, McConnell’s move helped Democrats extend the debt ceiling through about December 3. House Majority Leader Steny Hoyer (D-MD) said the House would be back in session on Tuesday, October 12, to vote on the matter. The House is currently in recess.

As the news spread on Thursday morning, McConnell took flack from all sides. The Democrats and liberal media jumped with joy as they claimed the minority leader “caved” from his previous position that Democrats pass the bill on their own through reconciliation. That’s not surprising. What was surprising was the disappointment expressed by Republicans ready to force Democrats to fund their out-of-control spending on policies they vehemently disapprove. The GOP rank-and-file was willing to let the debt ceiling expire to make their case.

Former President Trump slammed McConnell and said Republicans should remove him from office. Sen. Kevin Cramer (R-ND) said the disappointment stemmed from a letter 46 Republicans wrote Schumer in August declaring that there was no way, under any pretense, they would vote to increase the national debt ceiling. Some Republicans said McConnell blinked too soon. Nonetheless, many Senate Republicans also expressed they understood the strategy.

As Republicans dug in, the pressure was building by the Left to end the filibuster. Leading up to the Wednesday announcement, McConnell met with Moderate Democratic Sens. Joe Manchin (D-WV) and Kyrsten Sinema (D-AZ) to discuss the filibuster issue. Both Senators are staunch supporters of the filibuster. To alleviate pressure on them, it appears McConnell struck a deal with Schumer on the debt ceiling.

It’s a short-term fix to a long-term problem. December 3 is coming quickly. McConnell hopes it’s clear to Democrats they now have time to include the debt ceiling in their partisan reconciliation plan and pass it on their own. He threw them a lifeline and developed an alliance with the two most influential Democrats in Washington, DC. What Democrats do with said lifeline is up to them. They won’t have an excuse. They’ll only have a partisan play left to them, and they will likely push the issue.

If a speech by Schumer after the vote is any indicator, not much is going to change. After Republicans helped him increase the debt ceiling temporarily, the Majority Leader excoriated the GOP from the Senate floor. Sitting behind him was Manchin, who was visibly disturbed by Schumer’s appalling behavior. Afterward, Manchin said Schumer’s statements were not appropriate and addressed them with the Democratic leader. He said people need to stop playing politics.

Good luck with that one. Hard feelings are about to get more complicated after Republicans worked in good faith. Schumer trashed the effort and told half-truths. Where do we go from here? Who knows.

The next few months are going to be full of political theater.