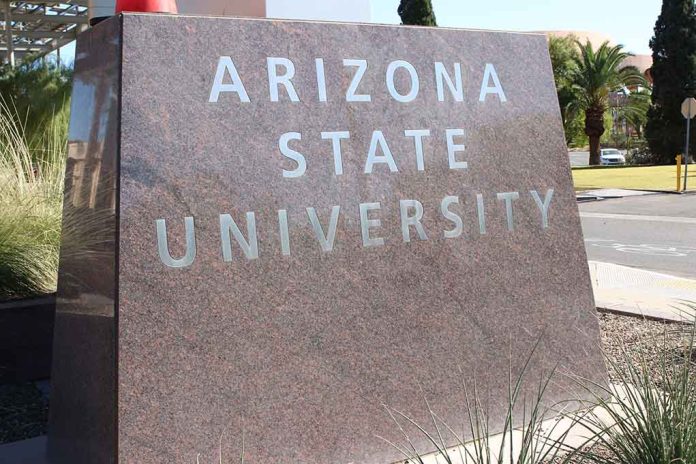 (UnitedVoice.com) – In November, a Wisconsin jury found Kyle Rittenhouse not guilty in the deaths two men and injuring of a third. The teenager shot the three after being attacked during the 2020 Kenosha riots. Even though a jury acquitted him of all charges, a Leftist woke mob is trying to ruin him.

During the trial, Rittenhouse testified that he’s taking classes at Arizona State University (ASU). The school confirmed he was enrolled online. A group of students, dubbed Students for Socialism, became enraged and demanded the school kick him out, even though he’d been acquitted. The group demanded the University denounce white supremacy, calling Rittenhouse a “racist killer.” The slur made little sense considering both he and the men he shot are white. They also want campus police defunded.

According to local news ABC 7, ASU confirmed Rittenhouse is no longer seeking a degree at the school and has not gone through the admissions process.

Rittenhouse is no longer a student at ASU. It's still unconfirmed as to why.

But if ASU actually caved to the woke, unhinged student groups, Rittenhouse's lawyers can just add them to the list of lawsuits. https://t.co/kTaOBR3IQI

Arizona attorney Dwane Cates told the local news that if the school gave into demands, ASU would be setting itself up for a lawsuit. The attorney pointed out that Rittenhouse already has an attorney and believes many people will be sued over the way the case was handled.

Neither ASU nor Rittenhouse has explained why he isn’t enrolled at the school any longer.