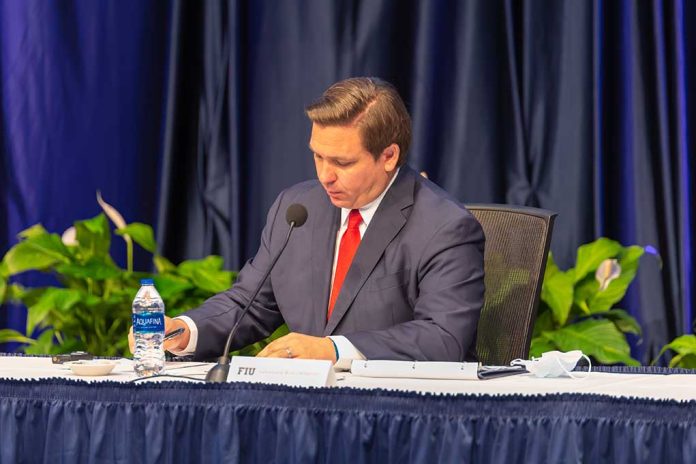 (UnitedVoice.com) – Florida Governor Ron DeSantis (R) has made a name for himself over the last two years for the way he has handled the COVID-19 pandemic. Rather than shut down his state and impose draconian mandates, he’s been pretty hands-off. Now he’s going up against President Joe Biden’s administration to protect his citizens from federal restrictions.

On Thursday, October 28, DeSantis and Florida Attorney General Ashley Moody visited the Lakeland Police Department to make an announcement about police bonuses. While they were there, the Republicans revealed they’re suing the Biden administration over the vaccine mandate for federal contractors.

Florida is suing the Biden Administration over its mandate on federal contractors that is unlawfully jeopardizing thousands of jobs.

No one should lose their job due to these mandates.

The lawsuit was filed in US District Court that morning and argues the president is violating the law by trying to impose “unlawful restrictions.” DeSantis pointed out that he thinks it’s ridiculous a company could have its bid canceled after all of the work it put into winning, just because of a vaccine mandate.

The suit states that the “unlawful vaccine requirement” interferes with Florida’s employment policies and could cause “economic harm.” It also asserts the president is overstepping his authority because nothing in federal law authorizes “such a radical intrusion on the personal autonomy of American workers.”

Biden’s mandate requires all federal contractors to receive the vaccination by December 8.