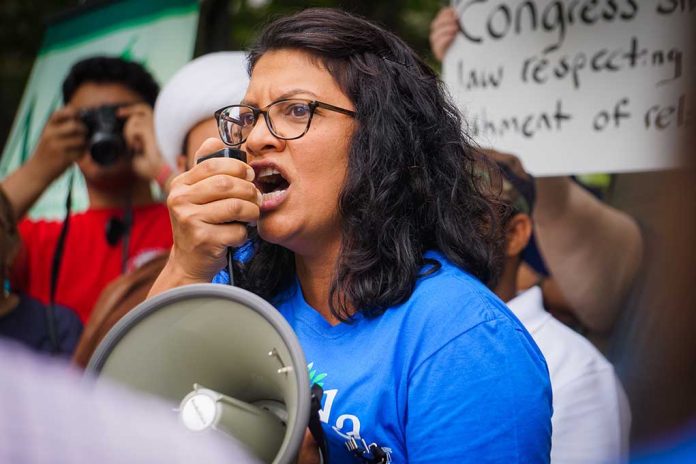 (UnitedVoice.com) – A prominent left-wing Democrat has been caught admitting that she’s only wearing a mask as political theater. The astonishing admission was caught on video last Monday and is now available online.

On October 4, Representative Rashida Tlaib (D-MI) was spotted talking to Housing and Urban Development Secretary Marcia Fudge after an event when a misunderstanding developed with another attendee. A man who wasn’t wearing a facemask thought he was being criticized for being the only person without one – and Tlaib quickly jumped in to reassure him.

“Oh no, not you,” she said, pulling off her mask and pointing at a man who was filming the meeting. “I’m just wearing it because I’ve got a Republican tracker here.”

That admission might have been an honest one from Tlaib, but it was far from smart – because, of course, the “Republican tracker” had his camera running and caught her words on tape. Last Wednesday the Washington Free Beacon posted a video of the exchange, sparking a wave of anger at the congresswoman’s cynical posturing. One Twitter user asked sarcastically, “Wait a minute… you’re telling me it’s NOT about health??”

Wait a minute… you’re telling me it’s NOT about health?? pic.twitter.com/hwLGpaDa9j

Tlaib has been in trouble for her inconsistent approach to mask mandates before. In August, she criticized Senator Rand Paul (R-KY) for his opposition to mask mandates – just hours before she danced maskless at a wedding. It seems hypocrisy has no limits on the Left.