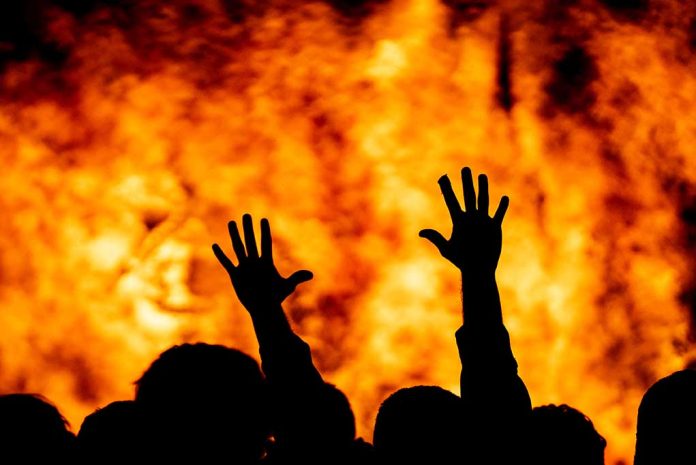 President Forced To FLEE – He Was In Danger!

(UnitedVoice.com) – Could corruption and the mismanagement of one country cause citizens to topple its government? That appears to be the case in Sri Lanka. After months of protests, on Thursday, July 7, protestors decided they’d had enough after the south Asian country of 22 million people experienced a massive economic meltdown resulting in political chaos. On July 13, President Gotabaya Rajapaksa fled the country but didn’t resign as promised. Instead, he infuriated the masses more by installing embattled Prime Minister Ranil Wickremesinghe in his place, who said he would leave office once a new government was in place.

The dire economic situation in Sri Lanka, prompted by exploding inflation, has led to severe shortages of food, gasoline, and other vital needs. After Rajapaksa fled the country, protestors stormed the prime minister’s office and the presidential palace. What remains of the government issued a national state of emergency. Sensing they had gained the upper hand, protestors backed away and called for calm.

Opposition leaders to Rajapaksa say the president and his family stole money from the government for years. Making matters worse, they also accused the former Sri Lankan leader of creating policies that proved destructive to the economy. Rajapaksa’s family denied they were corrupt but acknowledged that several bad policies aided the economic meltdown.

After protestors stormed government facilities, images captured them resting on luxury sofas and beds. Some even posed at the desks of high-ranking government officials. In addition, some set fire to the prime minister’s private residence. The protestors said they wouldn’t leave the presidential palace until lawmakers installed a new government, but they quickly changed tactics.

Opposition leaders said they were concerned some protesters on their side might become violent. If so, that could undermine their message and hurt their chances of installing a leader who would solve the economic problems on behalf of the people. The leaders said there isn’t anything more to prove after the people exerted their power, and they don’t have to occupy government facilities to make their point. Still, they vowed to continue protesting outside the president’s office until Parliament installed a new president.

The military warned on Thursday, July 14, that the country still faces the prospects of violent protests. The army moved in armored personnel carriers to protect Parliament. In some cities, the government initiated curfews. Still, it had little impact due to a lack of mobility over fuel shortages.

The political situation directly threatens an already dire economic situation in Sri Lanka. Without a government in place, the International Monetary Fund could withhold aid. Currently, the country depends on China and India for financial assistance.

Rajapaksa initially fled to the Maldives aboard a Sri Lankan military plane. Ultimately, the former president left that country, too, and arrived in Singapore. Still, it’s unknown whether that will be his final destination. Until Rajapaksa formally resigns from office in writing, his inaction may block lawmakers from governing, and more chaos could ensue. If he does leave, Parliament will appoint a new president on July 20 to serve the remainder of Rajapaksa’s term, which ends in 2024.