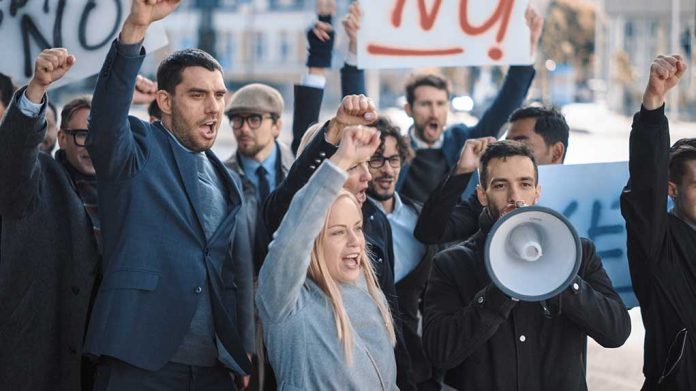 (UnitedVoice.com) – Red Cup Day is a favorite of Starbucks regulars. Once a year, the company picks a day and gives away holiday-themed reusable “Red Cups.” It requires a crafted beverage purchase and only lasts until they’re gone. This year, however, Red Cup Day went differently for customers and employees at a whole bunch of locations.

On November 17, Starbucks employees from over 100 stores walked out in protest over the company’s refusal to allow workers to unionize. The strike, scheduled all day for some and shorter shifts for others, definitely made a mark.

BREAKING: Fast food workers are on strike in Los Angeles.

We're marching on @starbucks before launching a caravan and converging on corporate HQs across Orange County.

Starbucks Workers United, the group behind the walkouts, says workers in 25 states want better pay, more support in busy stores, and consistent scheduling, according to the Associated Press.

The initiative may seem largely symbolic, as 100 stores is a tiny percentage of the company’s 9,000 locations, but it got plenty of attention. A store in Seattle saw managers working the counter while baristas fought for better working conditions outside — just three miles from Starbucks headquarters.

Silvia Baldwin, a 26-year-old barista from Philadelphia, loves her job but feels the pressure of understaffing. Per the Associated Press, she said the strike on what many believe is the company’s busiest day was “impossible to ignore.”