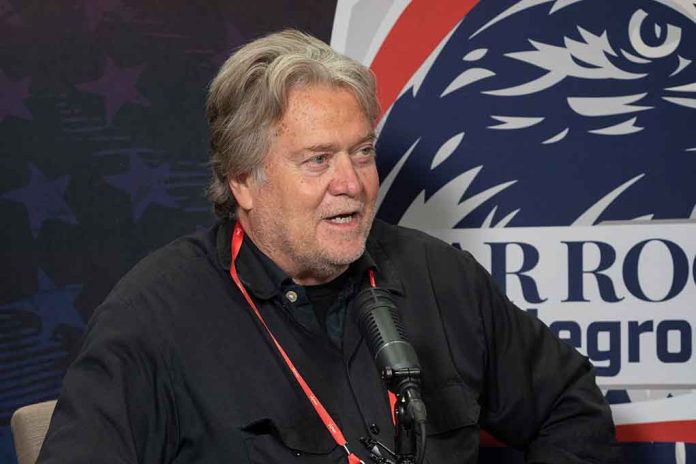 (UnitedVoice.com) – Conservatives have come under attack lately in a terrifying way. People have anonymously called emergency services and falsely reported crimes in progress, leading to large law enforcement responses. The crime, known as swatting, has led to at least one death over the years. Now, an ex-senior advisor to former President Donald Trump has become a victim of the dangerous act for the fourth time.

On Labor Day, Steve Bannon was hosting his “War Room” show when he experienced another swatting episode. The longtime conservative told The Post Millennial a phone number with a New York area code called in the complaint. This latest incident comes after three others where law enforcement arrived at his Washington, DC, home.

Bannon mentioned the ongoing swatting incidents in a podcast interview with Rep. Marjorie Taylor Greene (R-GA) at the beginning of the month. He asked the congresswoman if she intended to back down in light of her own swatting incidents. She responded, “Hell no!”

BREAKING: Steve Bannon was Swatted again, this time during his show.@RepMTG, who has also been Swatted recently multiple times: “I’m not backing off a single inch.” pic.twitter.com/rZP6bInkJv

Both Bannon and Greene are controversial Conservatives. Being swatted takes the animosity toward them to an entirely new level; it puts their lives in danger. In 2017, police killed Andrew Finch after someone called in a false report. Officers shot the 28-year-old as he stood on his porch.

What do you think about the latest swatting incidents?