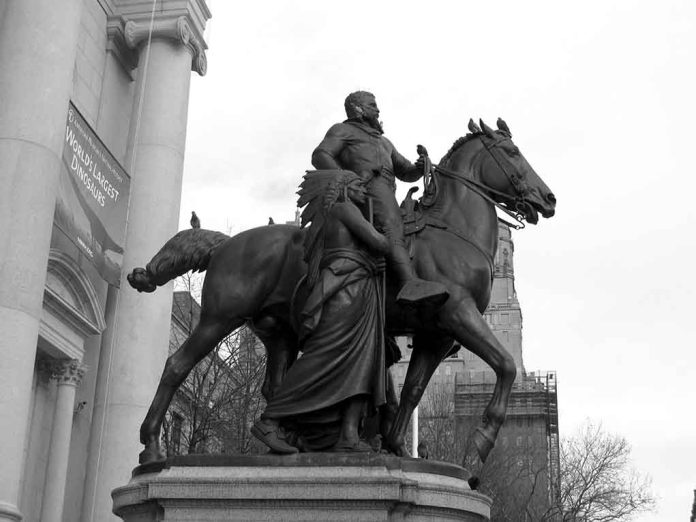 (UnitedVoice.com) – The woke mob has won another victory against the US after one of New York’s leading museums said it’s going to move a statue of Theodore Roosevelt from outside its doors.

Another victory for the Cancel Culture Mob! A bronze statue honoring Republican President Teddy Roosevelt will no longer welcome visitors to New York City’s American Museum of Natural History after a stint of 81 years. https://t.co/QgH4JyCgHk

On November 19, the American Museum of Natural History announced the statue of President Theodore Roosevelt, which has stood outside its main entrance since 1940, is to be removed and sent to North Dakota. The move follows complaints that the statue, which shows Roosevelt on a horse and flanked by a Native American and an African American, is “problematic” and “supports a thematic framework of colonization and racism.”

The museum first started talking about removing the statue last year, encouraged by NYC Mayor Bill de Blasio (D). Now it’s reached an agreement with the Theodore Roosevelt Presidential Library (TRPL) to move the artwork to Medora, ND for storage. The library plans to open to the public in 2026 and could put the piece on display then.

NYC Deputy Mayor Vicki Been said the city was grateful to TRPL for allowing the statue to be “appropriately contextualized,” which means any new exhibit will probably portray Roosevelt as a racist. Yet another piece of our history has been removed to placate the extreme Left.