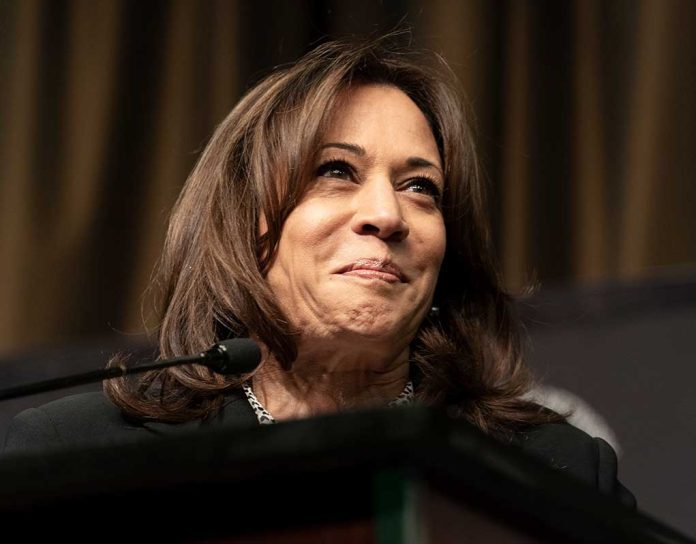 (UnitedVoice.com) – Kamala Harris is not a popular Vice President. Frankly, she’s never been a popular politician. In 2019, then-Senator Kamala Harris (D-CA) attempted a run for the presidency. The results were so poor she couldn’t raise money and never made it above 10% approval in the Democratic primary. By December 2019, Harris’s poor performance forced her to drop out of the race. It had nothing to do with her gender or the color of her skin.

When Joe Biden picked Harris as his running mate in the summer of 2020, it surprised the political world. She never had much competition in California when she ran for San Francisco attorney general or the US Senate. Her one serious campaign bombed, and she didn’t appear prepared for the highest level of politics. Nonetheless, voters don’t vote for vice presidents. They vote for the person at the top of the ticket. A year later, people continue to be unimpressed with Harris, and the White House is trying an old, true, and tested tactic to combat it: identity politics.

In March, the president assigned Harris as the go-to person to fix the illegal immigration problem. As millions of migrants continue to pour across the border, Harris hasn’t been seen or heard from — but voters know who’s supposed to be in charge. Despite having no experience as a small business owner, the White House tapped her to be the ambassador to small businesses in May. That’s not going well either, as inflation crushes small enterprises. Oh, let’s not forget about the Democrat’s attempt at rigging voter reform laws in their favor; she’s supposedly overseeing its passage in Congress. It stands no chance of passing.

So, what has the vice president accomplished? Nothing. Actually, it’s even worse than that. As her staff starts resigning, stories have emerged saying her office is in disarray. Unsurprisingly, voters don’t appear to approve of her anymore now than they did in December 2019. On November 7, ABC’s FiveThirtyEight showed the VP’s approval rating at an abysmal 29.1%.

As criticism mounts over Harris’s lackluster results and approval ratings, White House Press Secretary Jen Psaki says critics are sexists and racists. Yet, that doesn’t explain a 29% approval rating. Only the vice president can do that to herself. Does Psaki believe that many women disapprove of her just because she’s a woman? Or do minorities not approve of her because of the color of her skin?

Apparently, Psaki really believes her rhetoric. The press secretary told Politico all of Harris’s “firsts” are more important than the results she achieves. Psaki said she’s the first African American woman, the first Indian American woman, and the first woman, in general, to serve as vice president. She stated Harris wants people to see her as experienced and an expert in substantive policy issues and as a partner to the president.

Here’s the problem… Harris is none of those things. She didn’t even finish her first term in the Senate before becoming the vice president. Now, you can say the vice president is learning on the job. There’s nothing wrong with that, but she’s not an expert on anything, and the results bear it out.

The argument for sexism and racism is wearing thin with voters who are tired of the old playbook. When everything is sexism and racism, nothing is anymore. Invoking the argument when it’s unwarranted only serves to hurt people who are actual victims of those two issues. Harris is a victim of her own making. In the weeks, months and years to come, America is likely to learn more from those around her who continue to quit their jobs.

Until then, let’s hope the vice president counters the Psaki narrative.

Unfortunately, I wouldn’t count on it.