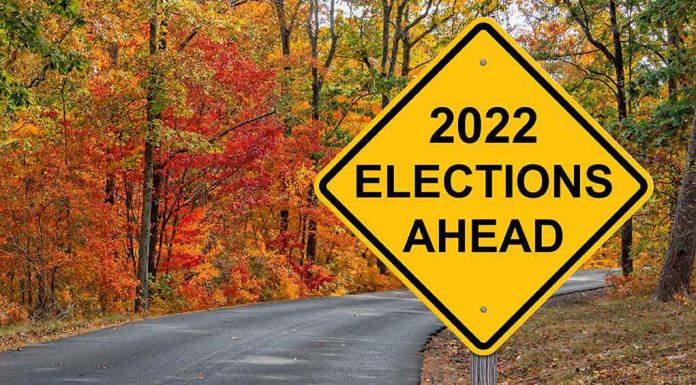 (UnitedVoice.com) – In 2020, things were not as good as they appeared for Democrats. Yes, Biden is in the White House, but Democrats and Republicans evenly split Congress. In the House, not a single Republican incumbent lost to a Democrat, and the GOP flipped sixteen seats in a year predicted to be a losing one for Republicans. Democrats picked off both Georgia seats in a January runoff election in the Senate when too many Republican voters stayed home over election integrity concerns. That’s not going to happen in 2022.

Currently, House Democrats have a razor-thin 3-vote advantage. In the Senate, Democrats and Republicans are split 50/50, with Vice President Kamala Harris being the tiebreaker. Not only is history on the Republicans’ side, so is redistricting and the incompetency of the Democratic Party to govern. In January, the primary season will kick off with a flurry of announcements, filings, and local politicking. Three issues emerged in 2021 for Republicans that could be their ticket to creating a massive red wave: Inflation, immigration, and identity politics — the three “I’s.”

The three issues are a potent and toxic mixture for Democrats who argue about them among themselves. Regardless, they believe the golden ticket to success would be the passage of the semi-Socialist Build Back Better agenda. It could be a fundamental misreading of America. Recent polling says Americans want less government, not more. The side that can best label its opponent and put them on the defensive early has a sizable political advantage. All three issues already define Democrats. So, let’s take a look at how Democrats are setting up the GOP for success in 2022.

Since February, former Democrat Treasury officials warned the Left against flooding trillions of dollars into the economy and overheating it. In February, former Clinton Treasury Secretary Larry Summers said if Democrats enacted their partisan COVID-19 relief plan, it would cause inflation to spike and hurt the people they claimed they wanted to help. Neither House Speaker Nancy Pelosi (D-CA), Senate Majority Leader Chuck Schumer (D-NY), nor President Joe Biden heeded the warning.

By the end of summer, consumer prices began skyrocketing as Americans flush with government cash were ready to spend it on products that weren’t plentifully available in the marketplace.

Recently, former Obama treasury official Steven Rattner got more specific. He stated the COVID relief bill spurred inflation and warned how the Build Back Better agenda would make a bad problem worse. He argued the Biden administration was wrong about transitory inflation and added it’s going to be a problem for a year or more. The last thing voters want is an effective reduction of their increased wages because of increased prices, making the value of their money less than before the pandemic.

As prices continue to climb, look for the GOP to pin rising prices on Democrats’ refusal to listen to experienced experts and knowledgeable voices inside their own party.

In 2016, then-presidential candidate Donald Trump brought illegal immigration to the forefront of the political conversation. As president, he built part of the southern border wall and instituted the highly effective Remain-in-Mexico policy. During the 2020 presidential election, then-candidate Joe Biden alleged Trump’s policies were inhumane and said he would reverse them if elected. Biden delivered on his promises.

You know the rest of the story. Illegal immigration surged on day one of Biden’s presidency and never let up. As of September 30, nearly 2 million illegal immigrants entered the US over twelve months.

For decades, no one was better at identity politics than Democrats. They routinely weaponized race and gender to their advantage. It finally caught up to them. On November 2, Virginia Republican gubernatorial candidate Glenn Youngkin won partially due to Critical Race Theory (CRT) in schools. School boards and the FBI even labeled some concerned parents “domestic terrorists” for challenging CRT.

The issue struck a chord with moderate voters concerned Democrats forced woke culture on them. The divisive issue suggested white America needed to atone for the sins of their ancestors and labeled anyone who disagreed with the Liberal worldview as an oppressive racist.

The three “I’s” are a powerful narrative, and Democrats may have a hard time overcoming them. The odds were against them all along. The issues make it more complicated for a political party that appears out of touch with everyday American experiences.