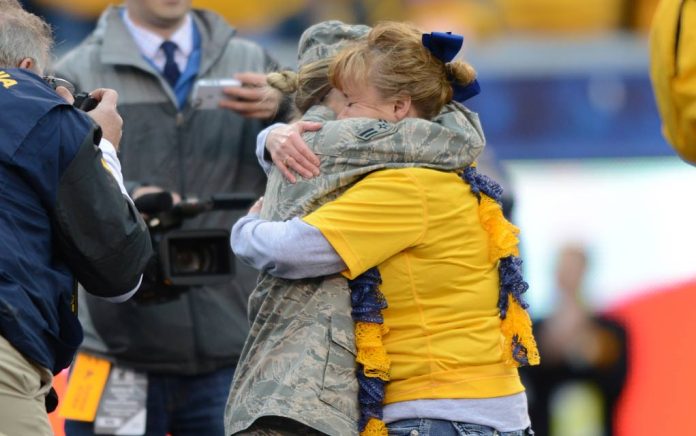 Military members sacrifice so much for the good of our country, with the biggest being time away from their families. Seeing someone who has been deployed surprise a loved one will often bring a tear to even the coldest of people. Here are some of the best military homecoming videos on the internet.

It had been a while since Drayton had seen his son Tereis, who was a freshman at The Citadel Military College of South Carolina. This was something the family had gotten used to. Drayton was often deployed, sometimes for years at a time, in areas like Iraq, Pakistan and Afghanistan. “He missed a lot of the kids’ stuff while they were growing up. He missed Tereis’ high school graduation last June. He tried to come back, but being deployed, you don’t always have that option,” said Drayton’s wife, Autumn Drayton.

The Army Staff Sargent wasn’t expected to return from deployment until January 2020, but once he found out he could make it home for a visit, he decided to surprise his son during one of his football games. After coming up with a ruse to bring Tereis out onto the field during half-time, his father walked up behind his son, bringing a giant smile to the boy’s face and touching the many people who were there to witness the surprise.

Chief Petty Officer Douglas Edmonston got the opportunity to surprise his three kids after finishing his sixth deployment with the Navy.

During a Norfolk Tides baseball game, his children were taken out onto the field. They were told it was part of a military appreciation night. While the announcer was talking about the accomplishments of their father, he surprised everyone there by welcoming Edmonston onto the field. Once they saw their father walking towards them, they all started to cry and ran to hug him.

A big welcome home to Chief Petty Officer Douglas Edmonston, who surprised his family with a homecoming after his 6th deployment with the U.S. Navy! 🇺🇸

Edmonston’s wife, Erica, who helped plan the surprise said, “I think we just want to get back to normal life – the day-to-day, hanging out, eating dinner, sitting the backyard… we missed out on a lot. It’s been a rough nine months.”

Imagine being six months pregnant and having to say goodbye to your husband as he’s deployed to Iraq, not knowing exactly when he’ll be back. This is the situation that Cassie Whelan faced. She gave birth while Sarpu was deployed, and the National Guard member had to get to know his baby daughter over Skype calls for the first few months.

Sarpu finally found out he would be coming home, but wanted to surprise his wife. He was able to do this during a special Mother’s Day episode of Good Morning America. Whelan thought that she was speaking to her husband via Skype. During the call as they were saying goodbye, he said he loved her and then walked out on stage. He immediately ran to hug his wife and hold his baby daughter for the first time.

This video might be one of the best things you’ll see on the internet for a while!