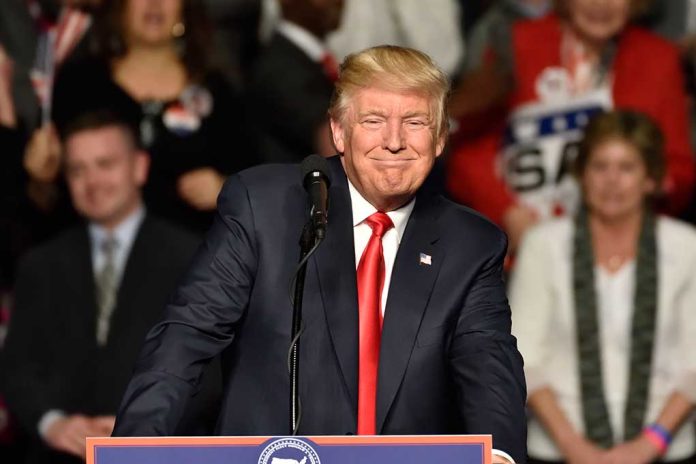 Trump SMILING After Latest Election Revelation – The Numbers Are In!

(UnitedVoice.com) – When former President Donald Trump left office in January 2020,  Democrats and the liberal media exhaled a sigh of relief. They genuinely believed it would likely be the last they would hear of Trump in political circles. In the wake of the January 6, 2021, riot on Capitol Hill and subsequent impeachment, they hoped Trump learned his lesson and would ride off into the sunset. Unfortunately for them, that wasn’t the case.

So far in the primary season, Trump is racking up record endorsement wins. Trump’s successes come as polls predict a potential Democratic shellacking by Republicans in November. As the former president continues to endorse candidates and wield his influence in Republican politics, many wonder if the former president will announce he’s running for the presidency in 2024.

The most significant election results on Tuesday came out of South Carolina. In 2020, Rep. Tom Rice (R-SC) voted to impeach Trump after the January 6, 2021 riot. Rice joined nine other GOP House members to impeach Trump for allegedly inciting an insurrection. For his vote, the South Carolina GOP censored Rice.

During the South Carolina primary elections, Trump endorsed State Rep. Russell Fry. The primary wasn’t even close. With 95% of the votes counted, Fry earned 51% to Rice’s 25%, among five other GOP candidates. Ballotpedia said Fry is the 6th incumbent to lose re-election this primary season. In February, Fry told Breitbart News Saturday that South Carolinians were shocked by Rice’s vote to impeach Trump.

Still, it wasn’t all a bed of roses for Trump endorsees. State Rep. Katie Arrington (R-SC) took on Rep. Nancy Mace (R-SC), setting up an indirect challenge between Trump and his former Ambassador to the UN and South Carolina Gov. Nikki Haley. Trump endorsed Arrington and Haley campaigned alongside Mace. Mace didn’t vote for impeachment or in favor of the January 6 House Select Committee investigation. After the election, Trump congratulated Mace on Truth Social and said she should easily defeat her Democratic opponent in November.

So far this primary season, Trump’s endorsement record is an astounding 129-8. On Tuesday, the following Trump endorsees won their primaries:

Upcoming GOP primaries will be held in Virginia on June 21, followed by Colorado, Illinois, Oklahoma, and Utah on June 28.