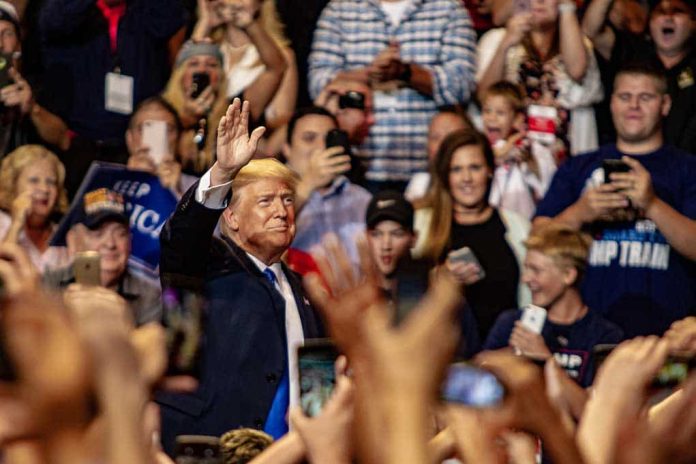 (UnitedVoice.com) – On July 23, President Joe Biden spoke at a rally of about 3,000 people in Lubber Run Park in Arlington, Virginia to stump for former Governor Terry McAuliffe, who’s running to lead the state again. The next day, former President Donald Trump blew that attendance number out of the water.

According to OAN, roughly 10,000 people showed up to a “Protect Our Elections Rally” hosted by Turning Points Action. The former president spoke to an enthusiastic crowd of supporters in Phoenix, Arizona. The event once again highlighted how popular Trump is within the Republican Party.

Trump said he was speaking at the rally to show support for election integrity. He blasted the results of the 2020 election, maintaining that he believes there was fraud. The former president said Republicans wouldn’t stop until they protected America’s free and fair elections. He also attacked Biden for his disastrous border policies.

President Trump slams @JoeBiden for his disastrous failure at our southern border, and for the human tragedies that are occurring daily.
"He said come in everybody and they all heard that and started walking up." #BidensBorderCrisis
For Real News -> https://t.co/bhQjl1oTmj pic.twitter.com/weuzj2LSho

Last month, attendees of the Conservative Political Action Conference (CPAC) overwhelmingly voted in support of a White House bid by Trump in 2024. If the crowd at the latest rally is any indication, Arizona voters are still excited about his presence in the GOP and America First agenda. Whether that convinces him to run again remains to be seen.