On the day Saigon “fell,” photojournalist Hubert van Es. was snapping pictures in the heart of Saigon. As he stood across the street from the American Embassy amidst the chaos, a scene unfolded that would become one of the most iconic captured moments from the Vietnam war.

People streamed into the embassy and up onto the roof. There, they climbed an additional set of stairs to reach a waiting helicopter — the same helicopter waiting to whisk them away for a return to the United States so they could escape the Communist regime.

Van Es quickly took out his camera and instantly immortalized the scene. In doing so, he created one of the most iconographic examples of America’s losses and failures.
The war was over, they were tired, defeated, and forced to flee the country back to their own home. There was shame, regret, and in many cases, anger over what many saw as an unnecessary war.

But what if we told you that isn’t the whole story?

Could the stories told about this iconic Vietnamese image actually be false? And if so, what’s the real story?

Although the details most commonly perpetrated about this image (and in fact, the entire end of the Vietnam war) is one of shame and failure, author Thurston Clarke tells a very different story.

Clarke talks about the image and the last few days before the war ended in his book,  “Honorable Exit: How a Few Brave Americans Risked All to Save Our Vietnamese Allies at the End of the War.”

There, he paints a unique and startling picture:

American soldiers and citizens living in Saigon worked side-by-side to smuggle out Vietnamese allies, saving them from certain death at the hands of the Communist regime.

Clarke’s book tells of diplomats, businessmen, soldiers, missionaries, contractors, and yes, even American spies, putting aside their own fears to rescue Vietnamese nationals. Many risked their lives to save translators, drivers, colleagues, neighbors, friends and even perfect strangers before extracting themselves from Vietnam. They were, in many ways, the innocent.

The “Fall of Saigon” photo seems to show Americans running away. Clarke knows that this was mostly a media spin. The real story started in the days leading up to when the iconic image was snapped.

“The news reports, photographs, and films of Da Nang … received wide coverage in the United States,” he writes. “Instead of unleashing Americans’ charitable impulses, the news convinced them that the United States should avoid becoming reinvolved in the war, even on a humanitarian basis, and opinion polls showed a majority of Americans opposed to accepting Vietnamese refugees.”

While all of this was happening, US Military leaders worked fervently behind the scenes to create a plan. Secretary of State Henry Kissinger argued that it was America’s duty “to get the people who believed in us out.” He also told Graham Martin that failing to help the Vietnamese would lead to a loss of “lives, national dignity, and a common sense of confidence that we can manage whatever crisis the future may hold.”

So they started making a list — at first, it included only high-ranking officials, translators and various other key players in the war. Over time, the list was expanded to include thousands of allies on the ground in Saigon and beyond.

By April 27, 1975, leaders knew the situation in Saigon was reaching critical mass. “Women outside the walls wailed and wept,” Clarke describes. “Some rolled on the sidewalk in hysterics, crying out the names of the American servicemen, businessmen and diplomats whom they had served as clerks, drivers, cooks, cleaners, bodyguards and interpreters. Mothers tried to pass their babies to Marines.”

It was often the only way to be sure their children would survive.

Leaders took the list and crafted a heroic plan to start extracting people en masse by helicopter, flying into Saigon under fire. They identified 13 key rooftops from which they could most safely pick people up. Their plan? Rescue and transport them from the rooftops to waiting ships.

31 pilots stepped up to fly the crafts. All were volunteers who had offered up their services at the peril of their own lives, and all flew under fire.

One pilot, O.B. Harnage, was threatened with a grenade when he landed at the Lee Hotel at 6 Chien Si Circle by a South Vietnamese soldier who swore to pull the pin if he didn’t let him on. Harnage threatened him back with a machine gun, telling him, “Go ahead. You’ll never hear it go off.”

Harnage was later forced to move his efforts to an apartment located at 22 Gia Long Street. He continuously pushed back high-ranking Vietnamese soldiers, opting to take perfect strangers and everyday citizens instead.

Eventually, gunfire forced him to leave Gia Long Street and move to the US Embassy.
That’s when van Es snapped his iconic image.

Van Es stepped out of a building just across the street from the embassy and blinked. A friend standing outside had yelled to him, cautioning him to be careful — there was a military helicopter sitting on the rooftop of the embassy next door.

It was Harnage landing his helicopter to rescue more people in what became the very last trip he would ever take to the zone. After the final pickup, gunfire made it impossible to return.

Harnage is pictured leaning down in his crisp white shirt, reaching for a Vietnamese national by the name of Thiet-Tan Nguyen (who later became a doctor in California after emigrating). Behind him was Tong Huyhn, another doctor, Tuyet-Dong Bui, a teenage girl, her little brother, and South Vietnamese Minister of Defense Tran Van Don.

The others have never been officially identified, but they, too, were a mixture of officials and everyday people. Harnage took them all without question, forcing some to sacrifice belongings in an attempt to onboard more people.

The iconic photo you see isn’t an image of US soldiers turning tail and fleeing at all. Rather, it’s an image that showcases the bravery of Americans at a time when it must have felt like the entire world was coming apart at the seams.

All told, Americans were able to extract around 130,000 Vietnamese people during the chaotic final few days and hours. Entire families were transported to either Guam or the Philippines, where the US Military started to prepare them for emigration to the continental USA under the existing refugee program.

Once they arrived on home soil, a great many of the immigrants went on to flourish and do great things. Tuyet-Dong Bui, for example, became a microbiologist and a biotech researcher for an American company.

Others went on to become lawyers, restaurant owners, CEOs or professors. Some simply lived out quiet lives, engaging in what must have felt like the American Dream compared to the chaos of Saigon.

Van Es died in 2008, but records show he received only $150 for the iconic photo. Today, a single license for the same image fetches nearly $600 on Getty Images, a sign of how important to our history it really is.

As for Clarke, he has his own thoughts. “At the time, this photo seemed to be a metaphor for Vietnam — our first lost war and us scrambling away from the roof of the embassy,” he writes. “It was a damning photo that fit into the narrative of the time.

“It was anti-heroic, but when you look at what’s actually going on on that rooftop, this was a moment of considerable heroism.” 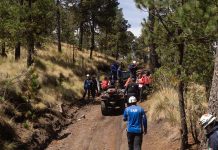