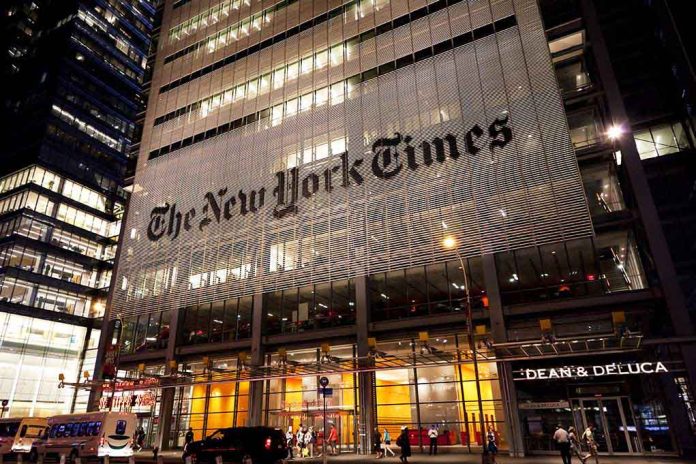 Tucker Carlson Releases This Photo to the Media

(UnitedVoice.com) – Over the last several years, Democrats and their enablers in the media have accused Conservatives of being white nationalists. The attacks by the Left ramped up in late 2015 and 2016 as then-Republican candidate Donald Trump ran on an old mantra that former President Ronald Reagan used — Make America Great Again (MAGA).

Over the years, Fox News host Tucker Carlson has exposed the Left’s destructive agenda and government hypocrisy in a way that only he can do. Part fact, entertainment, and satire, Carlson’s monologues have attracted scores of Democrats to watch his top-rated cable news show. On Saturday, April 30, The New York Times ran a hit piece on Carlson. Needless to say, Carlson had fun with it.

Conservatives have adjusted to highly-emotional labels thrown at them by the Left over the last decade. The Left has called Conservatives everything from sexist to racist, homophobic and xenophobic, and many other slanderous names. Over the years, Carlson has attacked the monikers head-on and exposed that there’s nothing to fear from a false label.

Still, in a 20,000-word hit piece, The New York Times called Carlson something true. They claim Carlson is a nationalist. On Sunday, the Fox News host posted a picture of himself smiling with the paper in hand. It makes it hard to know who got the best of whom. Apparently, Carlson is having the time of his life flaunting the NYT’s report.

So, what is nationalism? According to Merriam-Webster, it’s a loyal devotion to a nation that promotes its culture and interests as opposed to those of other countries. Now, what’s so wrong with that? It’s the essence of the MAGA movement that Trump started in 2016, and the Left can’t embrace anything Trump-related. Therefore, having devotion to America as an American is somewhere akin to racism or any other “ism” one can find.

Carlson Supporters Join in the Fun

Conservatives heralded Carlson on social media after posting the light-hearted picture of himself laughing at the article on Twitter. Former Rep. Trey Radel (R-FL) tweeted that 15 to 20 years ago, a hit piece from the New York Times could have killed a career. Now, it’s a badge of honor.

Maybe 15-20 years ago, someone smeared like this by the NYT would’ve had their career & life destroyed. Today, it’s a badge of honor because the Times’ staff has so clearly shown their job is to be PR foot soldiers and character assassins for democrats. What a pathetic rag.

Newsweek deputy opinion editor Batya Ungar-Sargon said the New York Times’s hypocrisy was on full display and called the attack on Carlson an attack on working people. She added that Democrats shared the same views on nationalism just 15 years ago. There were scores more supporting Carlson on Twitter.

The New York Times spent thousands and thousands of words and dollars to uncover the truth about Tucker Carlson: that he uses his platform to talk about the class divide and immigration depressing working class wages, views any Democrat would have proudly endorsed 15 years ago.

Carlson has the top-rated cable news show in America. According to The Wrap, “Tucker Carlson Tonight” earns more viewers in the coveted 25 to 54-year-old demographic among Democrats than MSNBC and CNN.

So, can you blame Tucker for laughing at the Times hit piece?