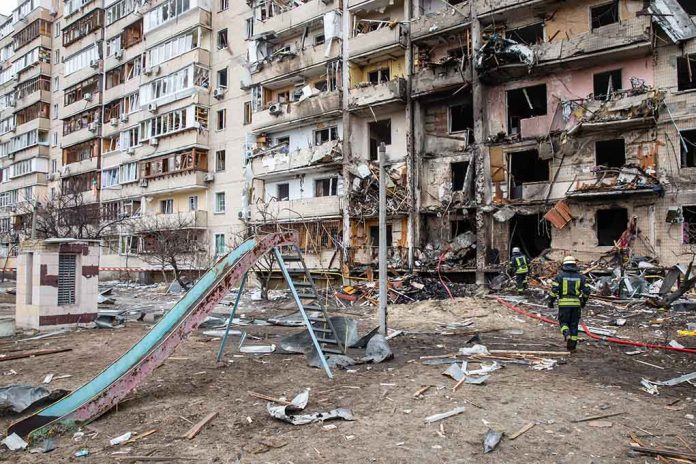 Russian Victory – A City Has Fallen

(UnitedVoice.com) – Over the last three months, the Russian military held up thousands of Ukrainian soldiers and citizens in the port city of Mariupol at the massive Azovstal Iron and Steel Works plant. Mariupol was once a thriving Ukrainian city of approximately 400,000 people. Ukrainian officials said at least tens of thousands of people died in Russia’s bloody hostile city takeover.

After weeks of bombardments on the steel plant, on Tuesday, May 17, Ukrainian officials ordered the soldiers at the plant to stand down and evacuate the facility. The surrender of the plant is the final stronghold in the once-mighty city, ceding Mariupol to Russia. Reuters reported that buses transported people from the plant. Now the question is, what becomes of their fate?

Over the last month, Russian forces surrounded and laid siege to the Azovstal plant, trying to starve out or bombard Ukrainian forces until they surrendered. On Wednesday, Russia’s defense ministry said 694 fighters surrendered overnight. Approximately 250 people submitted on Tuesday. That brings the total to 959 as of approximately 8:00 am Eastern time.

On Monday, the Ukrainian armed forces said that the soldiers in the plant fulfilled their combat mission, and the Ukrainian government would focus on saving their lives instead of fighting further. According to NBC News, the Russian military took Ukrainian soldiers to Russian-controlled territory. Reuters reported leaders of the pro-Russian separatist groups controlling the area said the Ukrainian commanders had not yet surrendered and were still inside the plant.

Russia said it would treat those captured humanely and in accordance with international law. Ukraine’s deputy minister said Ukraine would negotiate a prisoner exchange for Russian soldiers. Still, that may be unlikely if some in the Kremlin get their way. Some Russian officials said they want to ban prisoner exchanges and try the Ukrainian soldiers for war crimes.

What’s Next for Ukraine?

On Tuesday, Mariupol Mayor Vadym Boichenko told Reuters the Ukrainian soldiers holed up in the plant saved the country and gave Ukraine a chance to get ready for the war. The Ukrainian military said their efforts weren’t in vain as they slowed the Russian military’s 20,000 soldiers from invading other areas.

The military added that holding up Russia in Mariupol allowed the Ukrainian army to create defensive lines and rebuff Russian aggression in other areas. In addition, they said it allowed them to form reserves and regroup their forces while receiving assistance from other countries.

Russia wanted Mariupol because it was the last barrier between its borders and Crimea. Still, Russia had to bombard the city brutally into complete ruins to accomplish the goal. Yet, Mariupol was never supposed to be the prize, Kyiv was, and Russia failed mightily.

Regardless, the war is ongoing. When Russia makes a gain, Ukrainian counter-offensives appear to retake many of them. While Russia may have Mariupol, experts say it won’t dramatically shift the war at this point.