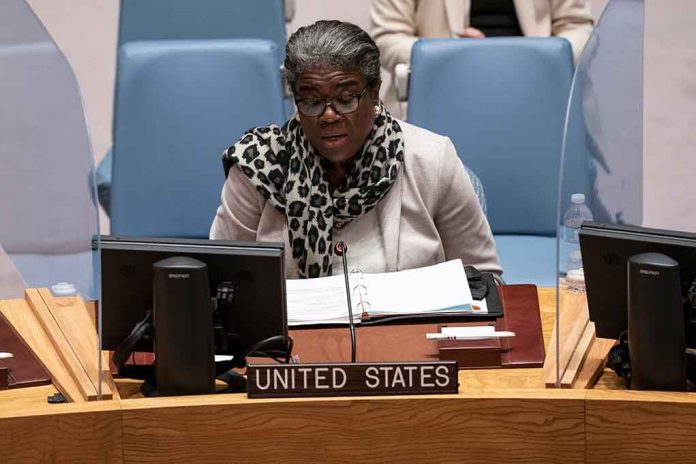 (UnitedVoice.com) – For months, Russia has been moving troops to its border with Ukraine. There are currently 100,000 soldiers stationed along the dividing line between the two nations. The US ambassador to the UN is now calling on Russia to take steps to reduce the tension.

On January 30, Ambassador Linda Thomas-Greenfield gave an interview to ABC’s “This Week,” and discussed what’s happening in eastern Europe. Although Russian President Vladimir Putin claims he has no intention of invading his neighbor, she isn’t buying it. She explained a country doesn’t just move “100,000 troops if [they] don’t have intentions to use them.” Host George Stephanopoulos asked the ambassador if she thought Putin’s regime could stop the UN Security Council from meeting. She told him they could try, but it won’t happen.

Ahead of United Nations Security Council meeting, U.S. Ambassador to the U.N. Linda Thomas-Greenfield says Russia will attempt to "distract from our unified voices.”

“We're not going to be distracted by their propaganda.” https://t.co/PIlfAYzEAG pic.twitter.com/IBJUSwRvqY

Thomas-Greenfield said the emergency meeting, which happened on Monday, a day after her interview, was an “opportunity to find the diplomatic way out.” She went on to say the country has continued to make the situation worse. The ambassador called on Russia to meet with the US at the negotiating table.

Russia has refused to enter into meaningful diplomatic conversations. On Monday, the country responded to the US’ de-escalation proposal, but the details of the response weren’t public at the time of this writing.