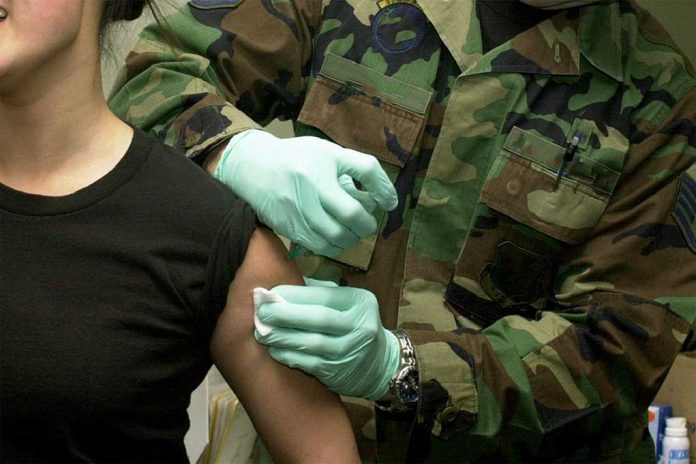 (UnitedVoice.com) – The US job market is struggling as the country tries to emerge economically from the COVID-19 pandemic. In 2020, governors forced businesses to shut down. Now, the aftermath is proving challenging as the government’s actions forced businesses and workers to redefine work in America. Even the federal government-enhanced unemployment benefit is gone. Still, millions of Americans remain unemployed. Vaccine mandates could exacerbate the problem for the military, first responders, and businesses in dire need of workers.

Americans are feeling the impact of the labor shortage across the board. It’s easiest to see it when dining out or trying to purchase a retail item. A new threat to the labor market is emerging. It revolves around vaccination mandates. Once again, the government is making a bad problem worse with overhanded policies.

Could Vaccination Mandates Cripple the Military and Police?

In August, President Joe Biden announced the vaccination requirement for all federal employees and government contractors. The penalty for non-compliance was job or contract loss. It appears the risk may soon be coming to fruition. Could the vaccine mandate erode the public’s trust in the president even more?

It appears military personnel are rebelling against the Commander in Chief. Hundreds of thousands of service members remain unvaccinated or partially vaccinated ahead of the Pentagon’s first compliance deadline. Suppose service members do not comply with the mandate. In that case, the military could punish them for failing to follow a lawful order of the President of the United States and their superior officers.

While the active branches of the military are more than 80% vaccinated, the reserves and National Guard are significantly behind. Roughly 40% of the part-time military force is fully vaccinated, and unlike the active-duty ranks, the reserves have eight months to comply. The part-time force makes up nearly a quarter of the US military. It’s unknown exactly how the Pentagon will discipline service members who remain unvaccinated.

In police departments across the country, public safety could be at risk. In Seattle, the city could terminate 40% of the police force could for refusing vaccinations. Over 400 police officers must inoculate by October 18, according to the mandate. Seattle isn’t alone. Virtually all police, fire, and first responder units face worker setbacks.

Let’s Not Forget About Other Industries

Soon, it could become harder to schedule appointments with your doctor, schedule a procedure at the hospital, or visit an ER. Hospitals and clinics are letting doctors, nurses, and healthcare workers go if they refuse vaccinations. These are the same people who braved the pandemic, worked countless hours, and risked their health and time with families. Potential terminations over vaccinations are the thanks they are getting.

It’s not just healthcare. It’s also transportation. United Airlines recently laid off 600 workers. American, Southwest, Delta, and others are requiring workers to vaccinate as a condition of employment. Will stories of stranded passengers result in less travel? If so, the standoff over inoculations could savage the massive transportation and hospitality industry financially.

Can the economy really handle this many unemployed workers because of a vaccination-induced crisis? Once again, the government is making a bad problem worse, and it’s Americans who will pay the price. It could be a short road to disaster. Even if America chooses a different path in 2022 and 2024, vaccination requirements could cause considerable damage to the economy and society before then. Because they’re always on the lookout to capitalize on a good crisis, Democrats could turn the situation they caused into an opportunity to dole out more government dollars, continuing to drive inflation higher and foster government dependency.

Let’s pray America wakes up before it’s too late.