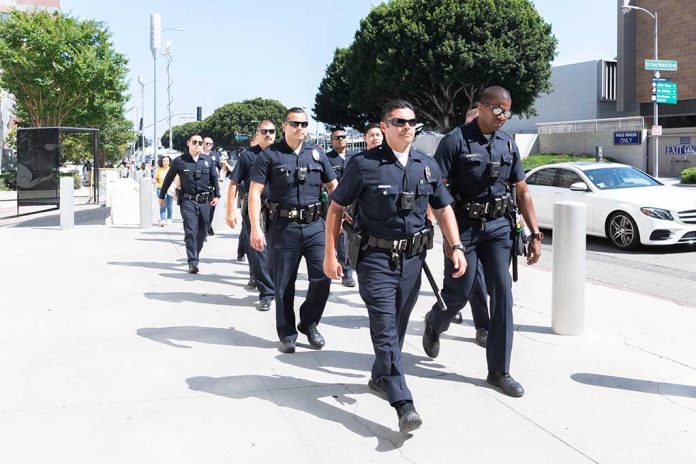 (UnitedVoice.com) – In 2020, America dealt with two significant crises; COVID-19 and social justice movements. As the summer wore on, protests over alleged police brutality turned into violent riots across many urban Democratic-led communities from coast to coast. Many Americans watched with outrage as rioters set cities on fire, destroyed property, and harassed citizens. By the end of summer, far-Left politicians and activists began calling for communities to either defund the police or abolish them altogether.

The politically toxic atmosphere grew more perilous as far-Left politicians seized the moment. In Austin, New York City, Chicago, Los Angeles, Portland, Seattle, and many more, cities defunded police departments anywhere from millions to billions of dollars. In many instances, residents pleaded with their elected officials not to do it. They said the answer wasn’t fewer police, but rather it was police reforms. The Left ignored the calls for moderation and slashed funding anyway.

Citizens Respond Through the Power of Voting

On Tuesday, November 2, nearly a year after cities and communities defunded police across the country, voters finally had their say. As citizens patiently waited over the last year, violent crimes surged in major cities while residents anticipated help from police who struggled to meet the demands of their communities due to lower staffing.

It all started in Minneapolis, Minnesota, in the wake of the death of George Floyd. On Tuesday, reality caught up with defunding the police movement. Voters overwhelmingly rejected a ballot initiative to demolish the police department and replace it with social workers. Despite donors and outside groups pouring massive amounts of money into the campaign supporting the initiative, 57% of voters said no compared to 43% who said yes. In addition, voters re-elected Democratic Mayor Jacob Frey, who opposed the measure. The two candidates running against him supported the movement to defund the police.

In New York City, former Police Captain Eric Adams easily won the mayoral race in the nation’s largest city. In July 2020, far-left Mayor Bill de Blasio and the city council cut $1 billion from the police budget. While Adams spoke out on social justice issues and policing as a police officer, he never supported defunding the police. Instead, Adams ran on refunding the police in New York City.

Americans widely respect and support their community police departments. Are there bad apples? Some people in every profession don’t meet professional standards, but it’s unreasonable to judge an entire profession by its worst members. Most law enforcement officers are public servants who believe in the good work they do. Every year, too many give their lives for those they serve and protect.

While voters defeated the issue around the country, it may linger for a while. Activists are relentless, even when they lose. For now, citizens in some communities had their say. More challenges are sure to follow.