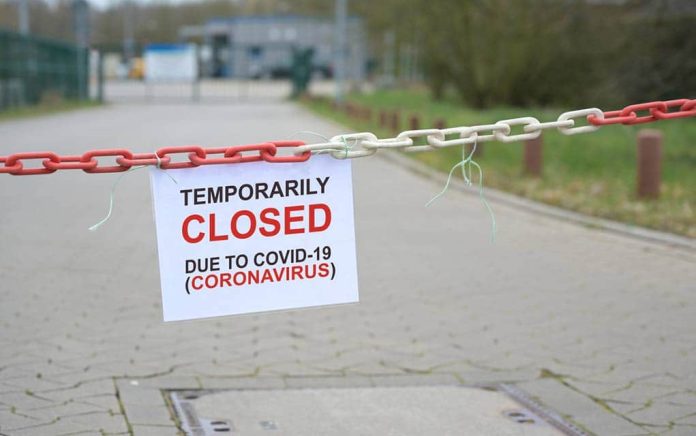 (UnitedVoice.com) – In Mid-March, governors across the country told their residents that the only way to bend the coronavirus infection curve was to temporarily close businesses and enact strict stay-at-home orders. Initially, temporary was only supposed to be a few weeks to allow hospitals to prepare. Instead, it turned into three months that decimated the economy, created trillions of dollars in new government debt, and destroyed people’s livelihoods.

In the wake of governors reopening states, protests erupted over the police killing of George Floyd. Thousands of people in cities across America could be seen on TV marching together in clear violation of social distancing guidelines.

Just weeks before, governors called conservative protestors “selfish” and “cowards” for not standing up to the disease by staying locked up in their homes. They said everyone had to sacrifice to ensure public safety. Over the last two weeks, those same governors marched with protestors within feet of one another in a blatant show of hypocrisy.

Over the last number of weeks, few have expressed concerns about the spread of COVID-19 since the protests and riots erupted. In fact, people have been encouraged to gather to express their collective anger over social injustice.

The issue isn’t one of appropriateness. The majority of Americans stand in solidarity with the black community — condemning the actions of the officers involved. The issue is that the government spent trillions of dollars fighting the spread of COVID-19, ruined an incredible economy, caused untold numbers of people to postpone life-saving surgeries, and the most severe consequences have yet to hit the housing and rental markets.

Were the Lockdowns for Nothing?

In early April, President Donald Trump warned that the cure could not be worse than the disease. Yet, that’s what is happening.

States are reopening, and health experts are warning that a second COVID-19 wave could be imminent. On Thursday, Treasury Secretary Steven Mnuchin said there would not be another government shutdown of the economy regardless of what COVID-19 does or does not do. Governors appear to agree with him.

As people start to come out of their homes and re-engage with their lives, numerous states are experiencing a significant number of new cases of COVID-19 with hospitalizations. Yet, governors are moving ahead with easing restrictions.

If the disease is as dangerous now as it was in April, why were states locked down so tightly for so long, and why were so many livelihoods not taken into consideration?

While painful, the lockdowns did offer some benefits. For one, it allowed researchers the opportunity to learn more about the disease and discover who were most vulnerable to it. Now that they know, they can better protect those who are most at risk without putting the public in some form of house arrest. Unfortunately, there are still no guarantees that cities, regions, or states won’t institute lockdowns again.

Despite the limited benefits of the lockdowns, it appears that governments are running out of money quickly. Perhaps, they’re discovering what many citizens already know. As with people, if state governments run out of money, there will be severe consequences.

Perhaps the lockdowns were for nothing if our sacrifice means the cure is worse than the disease.