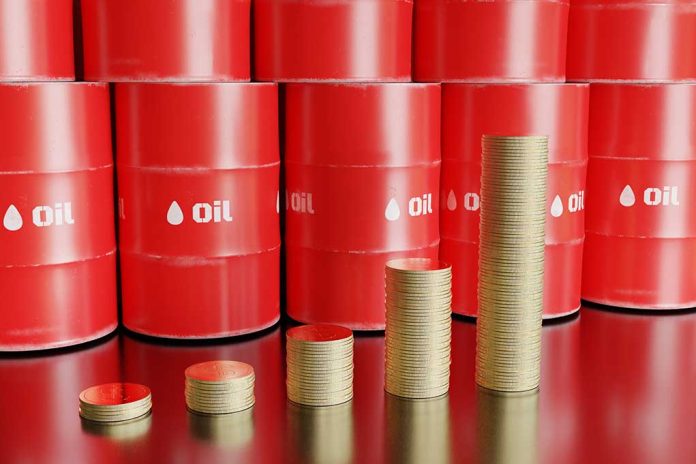 (UnitedVoice.com) – In the spring of 2021, Americans began feeling the squeeze of inflation as the country began emerging from the COVID-19 pandemic. President Joe Biden and Federal Reserve Chairman Jerome Powell stated inflation was transitory and temporary. It’s proven to be anything but. By the fall, a supply chain crunch had impacted prices, along with the effects of Biden’s energy policies helping drive up the cost of gasoline.

Now, the Russian war on Ukraine is contributing to inflation and a dramatic spike in gas prices as the US prepares to ban the world’s top exporter of crude oil. On Friday, March 11, AAA said the national average price of gasoline was $4.31 per gallon. The highest cost was in California at $5.72, and the lowest was in Kansas, with an average price of $3.82 per gallon. As prices rise, what does this mean for you looking forward?

Inflation Is Eating the Value of Your Money

In February, before Russia invaded Ukraine, the Labor Department reported consumer inflation rose a whopping 7.9% from a year ago. It’s the highest number since January 1982. Gasoline, grocery, and shelter prices led the way as the value of workers’ paychecks declined 0.8% in February for a 2.6% overall decline over the past year.

On average, Americans are paying $300 per month more for basic necessities. Economists say the problem will get worse before it gets better. Regardless, President Joe Biden and politicians on both sides of the aisle say increasing the financial pain on Russia will be worth the pain Americans feel at home.

Consequences of US and European Ban of Russian Oil

The consequences to Americans for the increase in inflation and rising gas prices due to the ban on Russian oil could be steep. First, experts expect energy prices to increase quickly. Just a few months ago, the price of one barrel of oil hovered around $50 per barrel. Economists believe it will approach $185 per barrel by the end of the year and perhaps go over $200 per barrel.

As oil and gas prices soar, so will the shock to your wallet. The cost of everything you purchase will go up as well. Every $10 increase in the price of a barrel in oil increases inflation by 0.2%. Yet, gas isn’t the only factor. Russia is also the world’s largest exporter of grains, fertilizers, nickel, coal, and steel. Stripping Russia from the international trading system will impact several industries.

Economists fear the US could experience stagflation in the coming months, defined as little to no economic growth coupled with high inflation. The Federal Reserve plans to increase interest rates in a better of the worst options to combat this. Economists say it won’t immediately halt inflation and will likely tip the US economy into a recession. Still, the Fed believes it’s a better option than allowing runaway inflation to get worse.

On Thursday, March 10, Treasury Secretary Janet Yellen contradicted the White House narrative on inflation. She said inflation is likely to remain high and very uncomfortable throughout the year.

So, what are the consequences to you?

It could mean less purchasing power, less value for your hard-earned money and fewer financial resources to achieve your financial goals.

Let’s hope that’s the worst of it.