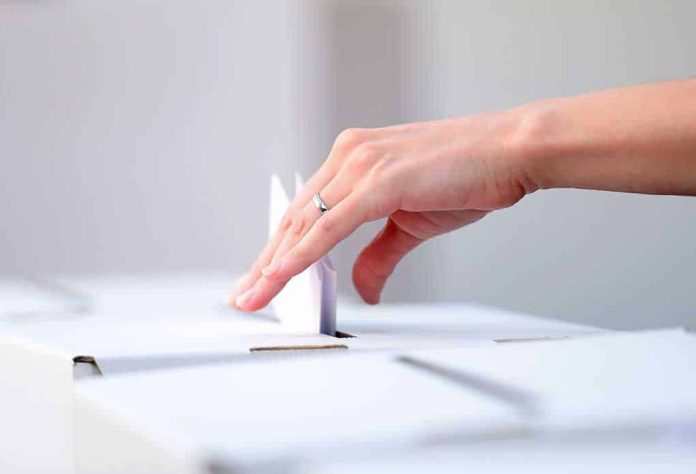 (UnitedVoice.com) – There isn’t a lot happening in the November 2 elections this year, but that doesn’t mean what is happening isn’t important. Joe Biden promised those who voted for him he would be a different kind of president. He said he would unite the country and calm tensions. The opposite occurred. This election is the first time voters will have a chance to express their formal approval or disapproval — at the ballot box.

As President Biden’s poll numbers tank, there’s anxiety in the Democratic Party. They naively believe the two-track infrastructure plan’s success or failure will determine their future. That’s not what the polls say. A myriad of self-inflicted wounds is the cause. The GOP is about to benefit from the Biden and Democratic miscues.

Are Gubernatorial Election Outcomes Tied to Democrats in Washington, DC?

Local issues usually decide elections, but what happens when national issues become local problems? That’s at the very heart of the upcoming elections on Tuesday, November 2, in New Jersey and Virginia. What’s happening in Washington, DC, is having a direct bearing on citizens across the country. For the first time in a long time, national issues are local issues.

Since the beginning of the year, Americans watched as over a million illegal immigrants were given free rein across the country. At the same time, the Biden administration pushed for vaccine mandates on Americans. Millions of people who refuse to vaccinate for health, religious, and personal reasons are about to lose their jobs. Inflation is sky-high, the shelves are empty, and energy costs are rising after President Biden shut down American energy production and then turned to OPEC+ for help.

Last summer, school board meetings became contentious after parents learned educators are pushing Critical Race Theory on students. The School Board Association labeled parents as domestic terrorists who disagree with their elected officials. Let’s not even get into the wild spending plans of Democrats in Congress. It doesn’t end there. America is in a legislative and cultural civil war between the Left, Moderates, and Conservatives, and the tight races in New Jersey and Virginia are bearing this out.

Democrats Call in the Big Guns

In the blue states of New Jersey and Virginia, this year should have been easy for Democratic candidates. It’s turning out to be anything but easy. The polls show the GOP candidates in the two states are running even with incumbent New Jersey governor and former Virginia governor and candidate Terry McAuliffe in Virginia. It’s so bad, Biden, Vice President Kamala Harris, former President Barack Obama and Left-wing celebrities are campaigning on their behalf.

In Virginia, McAuliffe’s only answers to the surging Republican candidate, Glen Youngkin, are to call him a racist and a Donald Trump acolyte. This behavior is what desperate Democrats stoop to when they are in trouble. Not long ago, McAuliffe said Biden was “unpopular” and tried to avoid him at all costs. Now, Biden’s actively campaigning for the troubled candidate. Biden and McAuliffe apparently know they can’t beat Republicans on the issues, so here come the strategies of division and race.

Are the Two Elections Predictors of 2022 and Beyond?

Does this mean the two races, or even one, are predictors for 2022 and beyond? An election represents the issues at the moment in time. The New Jersey and Virginia races may or may not be predictor elections. If the GOP candidates win or come close to winning, the next move is on the Democrats. What will they do in 2022? If Biden and congressional Democrats double down on their policies and proposals and continue to dominate the political landscape negatively, then yes, the 2021 gubernatorial races are indicators of elections to come.

Assuming the best-case scenario of GOP wins in either or both states, the next chess move belongs to the Democrats. If voters find they didn’t get their message across because Democratic legislators move forward with a radical agenda, the GOP could win massively in the 2022 midterms. The trend is already headed in that direction, considering the Democrats overplayed their hand in 2021 by claiming a mandate that didn’t exist, combined with redistricting, potentially giving Republicans a sizable advantage across the country.

As Democrats try to expand the federal government’s reach deeper into Americans’ lives, there’s likely to be a massive pushback against their agenda. Already, polls show Biden’s troubles might be becoming Democrat’s problems. The New Jersey and Virginia elections are the first tests of the GOP strength heading into the 2022 primary season, which kicks off after the first year.

Stay tuned. A lot is riding on Tuesday’s elections.