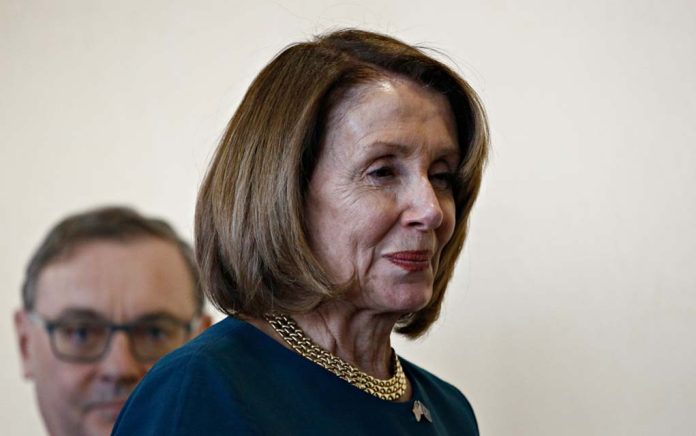 (UnitedVoice.com) – House Speaker Nancy Pelosi (D-CA) is in the news for all the wrong reasons yet again. This time, for introducing a bill that would allow for removing a president from office without going through all the trouble of impeachment or election. Most people assume it’s a transparent plot to unseat President Trump, but Pelosi insists it isn’t – and she might even be telling the truth.

Pelosi’s new bill is based on the 25th Amendment to the US Constitution, which outlines presidential succession and the process for declaring the president unable to do the job. Right now, only the vice president and the cabinet or other body decided on by Congress can decide the president isn’t fit to stay in office. Pelosi wants a congressional oversight committee to be that powerful body.

For Nancy Pelosi to say her 25th amendment psycho chatter in “Not about Trump” is an example of a woman in need of her own medicine. Please do the kind thing and put her in the hands of psychs so they can give her the proper testing & “care” she deserves. pic.twitter.com/OpbcWdKZnd

On the face of it, Pelosi’s plan seems pretty obvious – it’s aimed at removing President Trump if he wins in November but the Democrats control Congress, right? Well, maybe – but maybe not. After all, is Vice President Pence going to agree to step up just because a Democrat-dominated commission says so? It doesn’t seem likely.

So, could Pelosi be thinking about removing someone else from the Oval Office, and replacing them with an ambitious vice president who wants the job for themself? That’s an intriguing thought; who could she possibly have in mind? Luckily, with the bill certain to die in the Senate, we’ll never find out.